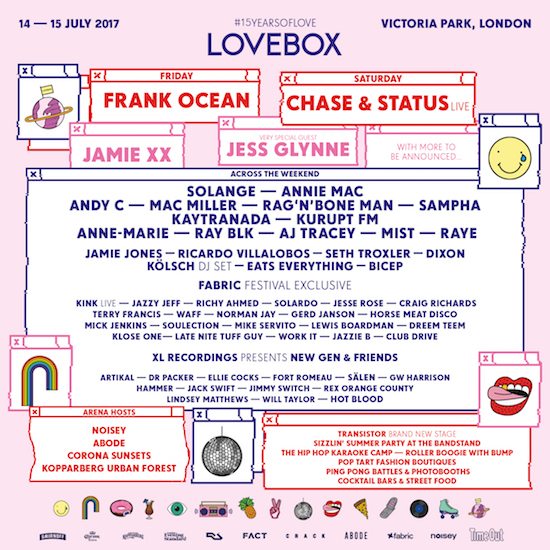 The first batch of festival lineups have been released and by the looks of it, music fans all over the world will have a lot to look forward to once festival season kicks off. From the ESSENCE Festival in New Orleans to Philadelphia's The Roots Picnic to D.C.'s Broccoli City Festival, there will be no shortage of good live music going around this year. Now music fans across the pond can add their own festival to the ever growing list with the announcement of this year's lineup for London's 15th Annual Lovebox Festival.

Festival organizers proved themselves able to do what many others have been unable to do thus far -- nab Frank Ocean as a performer. The reclusive singer is set to headline the festival's opening night, marking his first live show since releasing his visual album Endless and his actual album Blonde last fall. It will also be the first time Ocean has performed in London since 2013.

Solange, who will be very busy this year with multiple festival appearances, is also set to take the stage during the two-day festival. Other performers include Sampha, Kaytranada, Mac Miller, Soul II Soul's Jazzie B., Jack Swift, Mick Jenkins and Soulection. DJ Jazzy Jeff, who recently surprised us with his Chasing Goosebumps project, will also hit the stage for a live set.

The Lovebox Festival will take place July 14th-15th at London's Victoria Park. For more information about the multi-stage festival or to purchase tickets, visit the official website. With more acts slated to be added to this already jam-packed lineup, there's no doubt in our minds that this will be one of the season's hottest tickets.