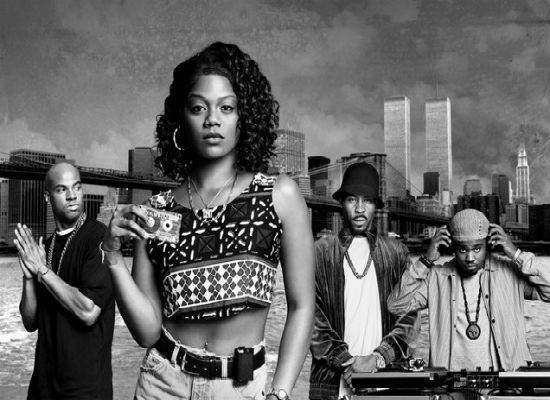 VH1's original series The Breaks will soon premiere and pick up where the hip-hop tele-movie/backdoor pilot left off last year. Applauded for its authenticity in everything from the score (all praises due to DJ Premier) to the wardrobe, the series is set in 1990 New York City during hip-hop’s Golden Era and chronicles the challenges and triumphs of main characters Deevee (Mack Wilds), Nikki (Afton Williamson) and David (David Call) as they forge ahead in the battle to prove hip-hop’s significance among the resistant in the music industry. We can’t wait to see what shenanigans the sharp-tongued music executive Barry Fouray (Wood Harris), as well as hustler-turned-MC Ahm (Antoine Harris) and our personal favorite character, Hotep rapper Imam Ali played by the fam Phonte.

This time around, we will welcome a few new characters into the mix. Rapper/actor T.I. and singer/actress/hot mama Teyana Taylor are set to join the cast, as well as Kim Wayans and Lela Rochon. The movie drew in 2.6 million viewers for its premiere in January 2016 and its encore airings. It’s reported that VH1 saw a 42% gain in viewership that month among adults under 50, which, coupled with the social media frenzy and countless blog commentaries and critiques that followed, explain why the network saw fit to green light this gem.

The much-anticipated series is set to premiere on Monday, February 20th at 9 p.m. ET/PT on VH1, but the network is already getting the party started right with the release of a super trailer. Throw your hands in the air, and check it out below. You can also revisit The Breaks movie and watch it in full on the next page.