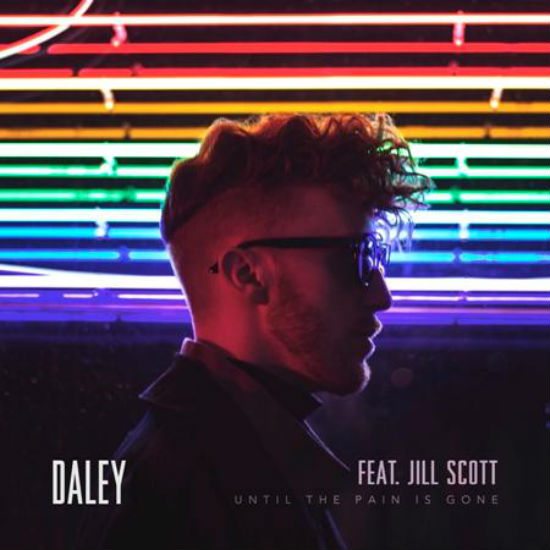 British singer/songwriter Daley is back with his new track “Until the Pain is Gone.” He enlists the soulful assistance of Queen Jill Scott to tell a story of loving someone who isn’t quite ready to love in return. The song is full of intensity and emotion as the two trade thoughts from opposite perspectives. Daley, coming from a place of courage fueled by hope, declares “You’re not the only one confused / In this world where love is prone to lose / Still I’m ready to give this thing a try.” Meanwhile, Jilly from Philly offers the push to Daley’s pull and confesses, “I don’t even know if I believe in love / Though in it with you I’d like to be / I’ve just been so cynical, baby / Can you convince me change my mind?” The two make musical magic on this track, and apparently, this is just the beginning of the melodic gifts we’ll receive from Daley this year.

The R&B hitmaker is set to release his upcoming studio album The Spectrum via BMG. For his second full-length (his first, Days & Nights was released in 2014, so it’s about time), Daley draws on professional and personal experiences from the last two years, including the loss of close friend and manager Richard Antwi. With this release, Daley has unlocked the next chapter of his musical journey with renewed inspiration and eagerly-awaited new music. Regarding "Until the Pain Is Gone," he says, "Having Jill involved is an honor. She’s royalty in my eyes — someone I’ve looked up to musically from a very malleable stage in my songwriting career. When I was just starting to understand how to put my feelings into song, Jill was one of a handful of influential artists whose music helped me figure out how to channel that."

So, how did the stars align allowing Daley to work with one of his greatest inspirations? After opening for one of Jill Scott's shows in London, the two stayed in touch. "In the studio writing this song, I just had a feeling…kept hearing Jill’s voice as the song developed, like it was asking for her energy," he explained. "I’ve learned to trust those gut feelings when they occur, so after a little hesitation, I sent it to her for her thoughts and was thrilled to receive a reply that she loved it! She took it and interpreted it in her own amazingly soulful way, and it was done." Sounds like kismet to us.

Check out the new single from Daley and Jill Scott right here. As well, in advance of the new album, Daley is hitting the road with Leela James on The Undeniable Tour throughout April and May. Find your city on the list below and buy tickets here.


TAGS:  audio, Daley, jill scott, leela james", Richard Antwi
Previous: GoldLink Raises The Stakes With New Album ‘At What Cost’ Next: Stokley Williams Makes Us Want To Get On His ‘Level’