Kendrick Lamar’s Latest Is Anything But ‘HUMBLE.’ 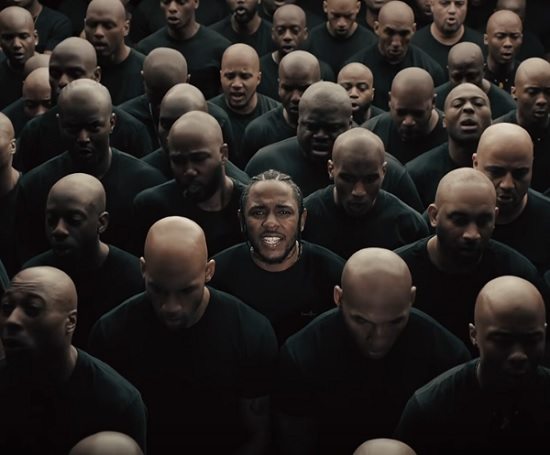 After the release of the street single “The Heart Part 4,” Kendrick Lamar continues his campaign to claim 2017 as his year with the radio and club friendly single “HUMBLE.” Over Mike WiLL Made-It’s sinister beat of hand claps, piano keys, stirring synths and echoes of Kendrick’s voice, the West Coast MC tells his rap brethren who have gotten the big head to have several seats. Mr. Lamar gloats about his accomplishments (“I quit this season, I still be the greatest, funk”), tells people stop questioning his skills (“Who dat n***a thinkin' that he frontin' on man, man? (Man, man) / Get the f**k off my stage, I'm the Sandman (Sandman)”) and says he wants to feel something real for once (“Show me something natural like ass with some stretch marks / Still will take you down on your mama couch in Polo socks”). However, Kendrick isn’t just bragging or boasting about his accomplishments and whips. The composition feels more like a parody of his more boastful rap brethren (*cough* Drake *cough* Big Sean *cough*).

The video for the track is a collaboration between The Little Homies (Kendrick and his high school friend Dave Free) and Dave Meyers. Meyers is known for producing some of the most visually inventive music videos of the ‘90s and 2000s. He has notably worked with Missy “Misdemeanor” Elliott on a number of visual masterpieces, including "Lose Control" and "Work It." Kendrick ain’t no slouch in the video department either, spinning his ghetto griot tales into gripping imagery to bring his words to life. The final result is a video that combines his hood bona fides, metaphorical styling and his comedic nature, bringing the best of Kendrick’s visuals to bear while elevating them to a new level.

The clip combines elements of urban life with religious imagery. Kendrick is shown as a rap god while still the homie from the hood. The video also has a little fun with some of the black and bougie antics of nouveau riche rap stars. The visual starts off in a darkened hall of a gothic building, Kendrick standing in the middle of the room dressed like the Pope, a light from a window in the distance shining down on our star, as if his rise was ordained by God. From there, we are treated to an amazing number of scenes, including a hood version of Da Vinci’s The Last Supper, passing the Grey Poupon between two old school Cutlasses and getting his hair did at the beauty salon. One image that stands out and has become signature for the artist is the wearing of white, most notably in two scenes where the star is dressed in a white suit like Tony Montana amongst a sea of well-dressed black men and him wearing a white hoody with the word “Dreamer” written in gangster gothic font while his head is on fire like he's in NBA Jam, surrounded by hood family in all black. Each scene hits you on multiple levels, as we are given not only cutting commentary on the lifestyles of the rich and shameless, but also a peek into Kendrick’s own experiences as the self-proclaimed King of Rap.

The roll out for Kendrick Lamar’s upcoming opus has been swift and severe. He's not giving fans or rivals a chance to catch their collective breath before putting that proverbial heat to your dome. "HUMBLE." is a clear departure from the jazz-influenced sound of Kendrick's last few projects. However, it still feels very Kendrick and very West Coast in nature, with its clever quotables and booming yet sparse production. It is rumored that the upcoming untiled album, which Kendrick alluded would drop on Friday, April 7th, will be more commercial in nature. While the word "commercial" gives most rap heads pause, when you hear a song like "HUMBLE.," you see your worries are unfounded. It's King Kendrick, after all. But, we'll have to wait and see if/when the as-yet-untitled project drops next week.