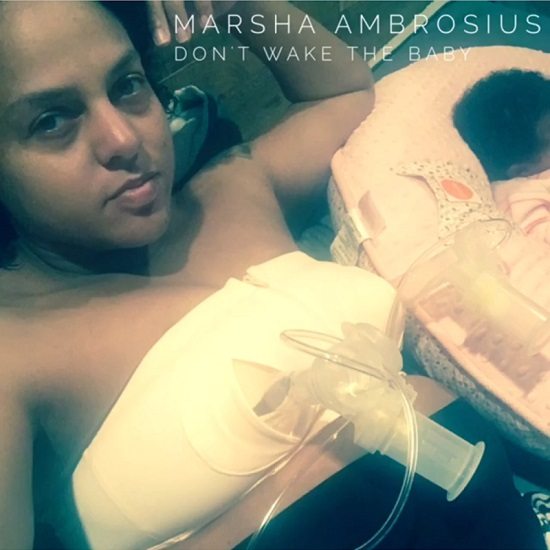 Marsha Ambrosius might have just given birth, but that doesn't stop her grind. And, apparently, it doesn't stop her sex life either. The new mom has returned to the scene to share a risqué little number about the joys of finding *ahem* adult time while trying to rear up a young one that she's appropriately titled "Don't Wake the Baby." But don't be fooled by the innocent title, this one is for the grown folks and grown folks only.

Marsha unleashes her full-on, unfiltered ratchet side for the track, singing on a bass-heavy number that mixes the 808s, frank language and stammering hi-hats of trap with a few R&B flourishes as she describes her need to get some now that the bundle of joy is down for a nap. "Just walkin' around in my lingerie / Just walkin' around in my lingerie," she vamps with piano accompaniment before hitting us with a full-on, lust-filled assault. "Walkin' 'round in my lingerie / You gon' and sleep on the couch / Talking that s**t out ya mouth / See alla dis you can't touch / I know that you wanna f**k." From there, she namechecks Auntie Solange and tells him to call his moms, because they might need a babysitter for the night — if you know what we mean. While the song is full of quotables (trust us, you'll be replaying a few times), perhaps the absolute best moment here is Marsha singing "I'm gon' get some d**k tonight" in three-part harmony and with the glee of a child opening a birthday gift. That being said, while she's down for a good time, you'd better not wake up that damn baby.

There's no word on whether or not more new music is coming from Marsha or if this is a one-off number, but honestly, this is more than enough for the moment. Take a listen to Marsha unleashing her freakier side via the Spotify stream below and pick up the track on iTunes.


TAGS:  audio, marsha ambrosius, solange
Previous: K’Valentine Hooks Up With BJ The Chicago Kid To Give Us The ‘Real’ Next: GoldLink, Jazmine Sullivan & Kaytranada Give Us A Musical ‘Meditation’