Ntjam Rosie Is Here To Stay On ‘Never Give Up’ 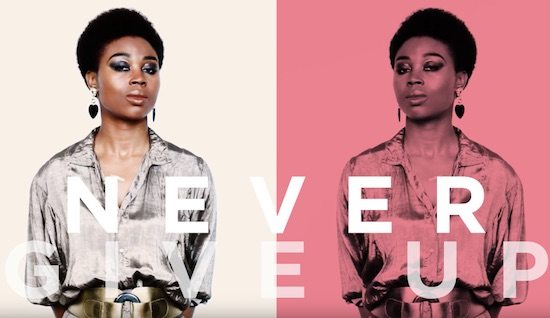 In these turbulent times, music is often the only thing keeping us as listeners from losing our minds and hope. However, this the case for artists as well, who transform their pain and passion into art. Dutch-Cameroonian singer/songwriter Ntjam Rosie is the latest to use her voice in an attempt to affect change with her newly released EP Never Give Up, led by the single and music video of the same name.

"These are times where you can not just sit there and say or do nothing. I feel obliged to move, to stand up for something bigger than just me and my own little world," says Ntjam about her inspiration behind "Never Give Up." "I believe that we are in these heavy times together, and we can only have a strong movement when we stick together. And when that movement is in and with love for one another, then we can move mountains. It's optimistic and idealistic, I know. But I believe in spreading a hopeful message. I do not ever want to give up on that."

Ntjam's optimism is contagious on "Never Give Up." Co-written with Vincent Helbers, she inspires and encourages with lyrics like, "I keep chasing my dreams / Your words of discouragement won't stop me / I'll never give up on us, no," on the danceable mid-tempo number that takes its cues from '90s R&B, UK soul and funk. The music video is a carefree complement to the song with the camera focused exclusively on Ntjam singing, dancing and having a good time by herself on a soundstage. There's movement, there's color, there's quick editing, there's a lot going on, but it all works together like an extended Instagram post in music video form.

Rosie has come a long way since we named her Bounce-Worthy in 2011. In the years since, she's released three projects and Never Give Up marks her sixth overall. The four-song EP is a short, sweet and groovy treat that marks a new page in her musical journey, and we are digging this chapter of her career. Join us in our admiration and watch the video for "Never Give Up" then listen to Never Give Up the EP.


TAGS:  audio, Ntjam Rosie, Vincent Helbers"
Previous: Andra Day Teams Up With Hyatt To Let Us Know ‘What The World Needs Now Is Love’ Next: Kintaro Wants You To Know You’re A ‘Superstar’