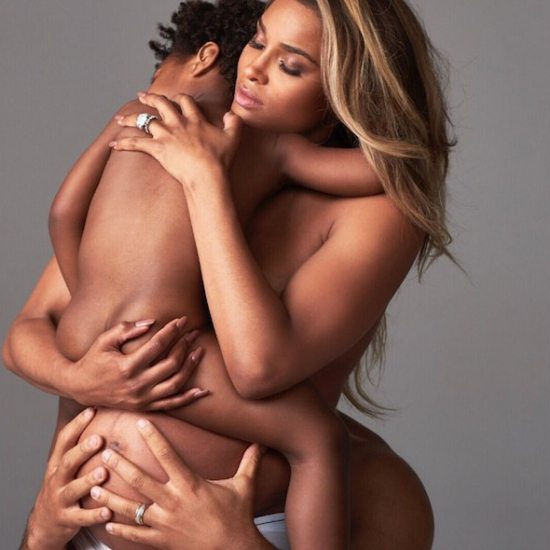 Ciara is gearing up to become a mother for the second time and, to commemorate the precious occasion, CiCi took to the pages of Harper's Bazaar for a stunningly beautiful editorial spread. In the interview, the "Promise" singer talks marriage, family life and the joys of bringing a new life into the world (oh, and her 13-year music career). While the interview was insightful, what everyone was talking about was the accompanying photoshoot, which showed CiCi baring it all in a tasteful shoot showcasing her growing baby bump. The one that got most folks buzzing? An awkward family pose that featured Ciara cradling a nude Future Jr. as hubby Russell Wilson's hands cupped her belly from behind, his face hidden by Ciara's body. The photo, seen above, got Black Twitter wondering what in the hell went through the minds of everyone involved and, of course, some funny as hell responses followed. Still, despite the unfortunate shot, we gotta say that pregnancy looks good on Ciara and she seems genuinely happy, so that's a win in our books. But maybe she might want to keep the family portraits a bit more traditional next time. #StickWithOlanMillsCici