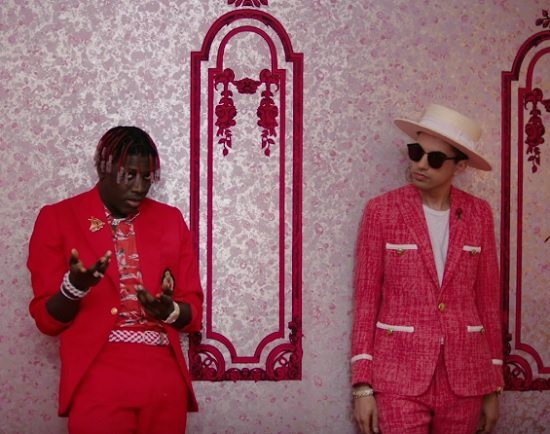 DJ Cassidy has given us lots of unexpected jams over the years, including his Robin Thicke and Jesse J collaboration "Calling All Hearts" and his disco-tastic "Kill The Lights" with Alex Newell and Nile Rodgers. This month, he added another to the list with the release of his single "Honor," which features Australian vocalist Grace and trap star Lil Yachty. Hot on the heels of releasing the track, the trio now offers the single's lavish visuals.

Color is the name of the game in the clip, which features each of the stars in vividly decorated scenes. Filmed in what looks to be the swankiest hotel ever, the video opens with Grace dressed in va-va-voom red among a room draped in various shades of vermillion and pink. We also see Cassidy rocking his signature wide-brimmed hat as he appears to direct the goings on. Soon, though, a plethora of female dancers wearing leotards and lingerie move through the scene as we are treated to different rooms in shades of emerald and cerulean throughout the clip. Eventually, Lil Boat and his Kool-Aid red braids are introduced into the mix while appearing in a cool blue, but we get to see the rapper in a few colorful looks throughout his verse.

Given the high-end production on the song, it's no wonder that this video looks like a million bucks. Peep DJ Cassidy and company's kaleidoscopic take on luxury in the video for "Honor" below.