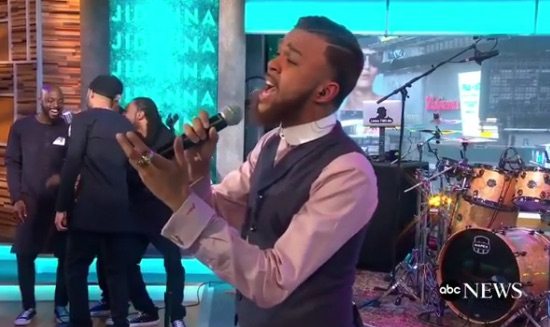 Although it was rainy and dreary in New York City this past Tuesday, it was anything but dismal inside the studios of ABC's Good Morning America. That's because Jidenna, our favorite dapper singer/rapper, graced the stage with a colorful live performance of his singles "Some Kind of Way" and "Bambi," both taken from his debut album, The Chief.

It was all clear skies and sunshine when he first took the stage to serenade the crowd with "Some Kind of Way." Despite the fact that they had had to wade through the downpour to get to GMA's Time Square-based studios, that all seemed a thing of the past as the studio audience excitedly danced and clapped along with him as he performed the anthem about brushing the haters off. He wove his way through the crowd with ease while working his musical magic. Host Michael Strahan seemed unable to contain his excitement as he stumbled over his words while announcing Jidenna's performance.

Jidenna and his four-piece band then returned to the stage to finish what they had started with a follow-up performance of "Bambi," the nostalgia-hued single that finds him proclaiming his love for a former flame who has moved on. As usual, his flair for the dramatic made for a great performance as he effortlessly held the audience in rapt attention with the tender ballad. Unlike his performance of the song on The Late Show With Stephen Colbert last month, Jidenna's disheveled appearance had been replaced by his usual, neatly-coiffed look.

His followers on Instagram were able to follow along as he led up to his morning show debut, taking them behind the scenes during the rehearsals leading up to the big day. All-in-all, it was a fun way to see the process through the eyes of this charismatic crooner. While we're not sure where the dandy man will pop up next, we're sure it will be just as exciting and enchanting as always.


TAGS:  Jidenna, Michael Strahan
Previous: SoulBounce Exclusive: APLUS Makes The Grade With ‘Pride Over Me’ Next: Jennifer Hudson & Ma$e Take It Back To The ’90s For ‘MR. DJ’