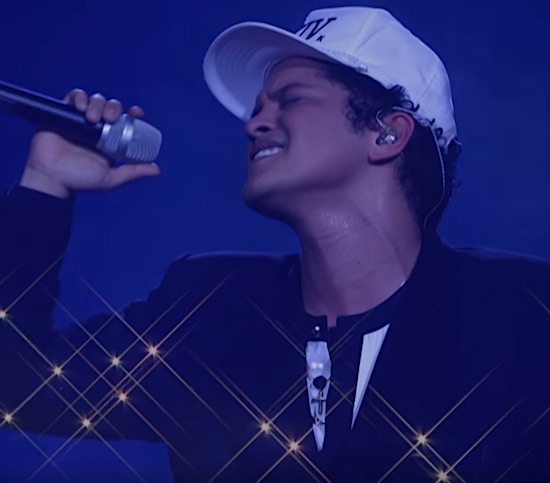 With over one million tickets sold on the first day alone, there’s no denying that one of the hottest concert stubs right now is Bruno Mars’ 24K Magic World Tour. This should come as no surprise to anyone who’s seen his televised performances in support of the album (i.e. SNL, GRAMMY Awards, BRIT Awards, etc.), but we’re admittedly biased. Just in case there are any skeptics out there, the electrifying multi-hyphenate showman took a break from his 128-show stint to close out the 2017 Billboard Music Awards last night with a performance of “Versace on the Floor.”

Mars was unable to attend the Las Vegas ceremony in person as he’s currently on the European leg of his tour with opening act, Anderson .Paak. But the satellite feed from his Amsterdam concert perfectly captured his charismatic performance, making us feel like we were right there in the front row. To set the mood, Bruno dimmed the lights and slowed it all the way down with a flawless vocal delivery of the song’s romantic intro. From the top of his signature XXIVK cap to the tip of his crisp Nikes, the ‘90s vibe was in full effect. As he continued the sexy serenade, he pulled out all the stops, wooing us with smooth dance moves and a razzle-dazzle stage show complete with laser lights.

Despite a magnetic performance, our boy went away empty-handed, losing out in his nominated categories to Beyoncé and Drake (who broke Adele’s previous BBMA record by taking home 13 awards). But he’s still got plenty to celebrate thanks to “That’s What I Like” recently topping the Billboard 100 chart, giving him the distinction of having the most number one’s of any male artist in this decade. Watch his “Versace on the Floor” performance below, download a copy of 24K Magic if you haven’t already and purchase your ticket for 24K Magic World Tour before they’re all gone. For those who wanna live that 24K lifestyle and “Spend your money like money ain't s**t," visit Bruno Mars’ official webstore where you can cop everything from pinky ring necklaces to "Chunky" doorknocker earrings.