Mary J. Blige & Lalah Hathaway To Embark On ‘Strength Of A Woman’ Tour This Summer 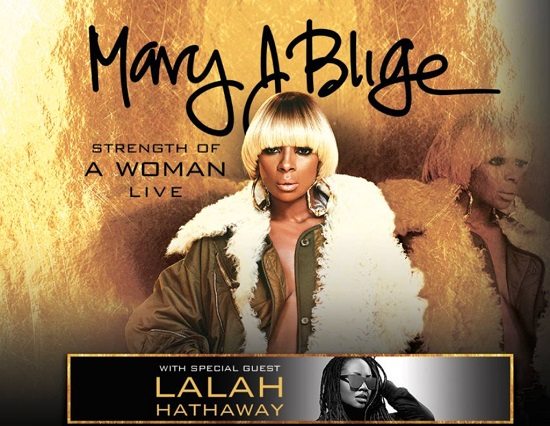 Mary J. Blige has turned personal pain into triumph with the release of her 13th album Strength of a Woman. The album has been well-received critically and was an instant favorite of Mary's die-hard fans. And now that the highly anticipated project is among the masses, there's only one thing for the Queen of Hip-Hop Soul to do: take her show on the road.

She'll be doing just that this summer, as she's set to embark on the Strength Of A Woman Tour. The world tour is set to kick off at ESSENCE Festival on July 1st at their first all-female lineup inspired by MJB's SOAW.  From there, Mary will hit cities domestic and international, including Philadelphia, London, Paris, Cleveland, Buffalo, Nashville, Atlanta, Baltimore, NYC, Dallas, Denver and Las Vegas, before she wraps things up on September 9th in San Francisco, California.

While that's all good and exciting, what's sure to truly make this tour an affair to remember is that Mary's special guest will be none other than Lalah Hathaway. Lalah will be featured as a supporting artist for selected dates on the tour and is sure win over an even bigger following with this high profile exposure. After touring with Anthony Hamilton and Eric Benét in 2016, this look is a glow up for our girl.

Tickets for the tour will go on sale to the general public this Friday, May 19th at 11 a.m. However, members of Mary's fan club, Citi Card members and Pandora Premium subscribers will have access to pre-sales starting May 17th and there will be a special Live Nation and Facebook pre-sale on May 18th. We definitely suggest that you find a way to be in that number. Check out the full list of dates below and head to Mary J. Blige's website for more ticket and purchase info.