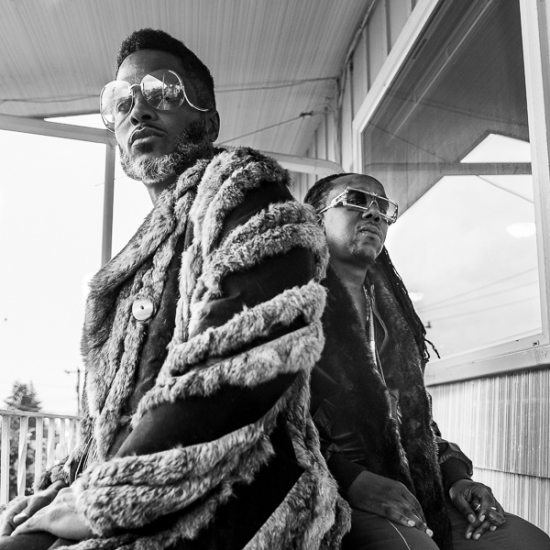 Musical alter egos provide a safe space for artists to sonically break free from the status quo and/or any preconceived expectations based on previous offerings. In recent years, we've seen the best and worst of this concept-driven approach to recording (think Cindi Mayweather and Emily vs The Husel and Rich Hipster). Shabazz Palaces emcee Ishmael Butler certainly falls into the former category, having successfully reinvented himself as Butterfly with Digable Planets and Palaceer Lazaro with Shabazz Palaces. After taking some time off for a DP reunion tour, he and multi-instrumentalist Tendai Maraire are ready to drop another SP album. But this time, Lazaro introduces us to his extraterrestrial persona named Quazarz, the "voice" of Shabazz Palaces' forthcoming project Quazarz: Born On A Gangster Star.

According to press release, Quazarz is "an observer sent here to Amurderca to chronicle and explore as a musical emissary. What he finds in our world is a cutthroat place, a landscape where someone like him could never quite feel comfortable amidst all the brutality and alternative facts and death masquerading as connectivity." On a mission to make you consider "the motions behind the things you like to consume artistically, rather than just the way something looks or sounds," the son of Barbara Dream Caster and Reginald The Dark Hoper will use music to "shine a light on the fake."

Recorded in Seattle in just two weeks, the album "flirts with a pop sensibility, but through the prism of Shabazz Palaces’s fire and fury." In additional to experimental sounds and thought-provoking lyrics, listeners will hear features "in body or in spirit" from, Thundercat, Gamble and Huff, Julian Casablancas (of The Strokes), Darrius Willrich, Loud Eyes Lou, Thaddillac, Ahmir, Jon Kirby, Sunny Levine and Blood.

Color us intrigued. Thankfully, Shabazz has given us a preview ahead of the album's official release on July 14th. Lead single "Shine A Light" is a trippy slice of '60s soul (thanks to a hypnotic loop of Dee Dee Sharp's "I Really Love You") and alternative hip-hop. Quazarz engages with a rapid flow that delivers a mouthful of lyrics in short amount of time. The track also features Seattle funk band Thaddillac (that's lead singer Thaddeus Turner you hear on the chorus).

Pre-order Quazarz: Born On A Gangster Star via SubPop or iTunes and check out the lyric video to "Shine A Light" below. If you're feeling the new sound, make plans to join Shabazz Palaces' cosmic journey this summer when their tour-ship lands in a city near you (scroll down for dates). Connect via their website, Twitter and Instagram for tour details and album updates. You can also catch Ishmael's alter ego Butterfly with his Digable Planets crew on select dates throughout this year.