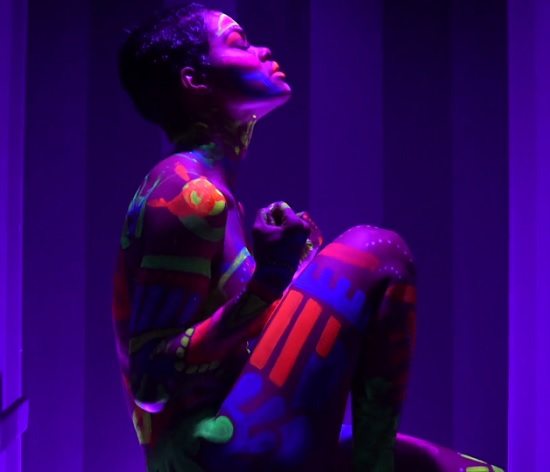 Teyana goes full-on sexpot for the bass-heavy number as the 808s boom and she announces her carnal desires. "Baby I'm bored, I'm bored, I'm bored inside / I want you now / C'mon, come on inside," she coos as the track opens,  letting her man know she wants him not now, but right now. And just in case he missed that memo, Teyana clears everything up with the song's bridge: "Wake up, I'm horny / Beat it up 'cause I want it." Well damn, Tey. For their part, Migos deliver pretty much what you'd expect from them. Quavo is first up, delivering a predictable verse that includes mentions of "no panties" while mentioning diamonds and mansions. Meanwhile, Offset closes things down by rapping about drowning in her river while also managing to mention that he pushes a Mercedes. While the raps don't necessarily bring anything to the table, they also thankfully don't disturb the groove.

For the clip, Teyana reveals a whole new side of herself...literally. She rocks a fly short hairdo and not much else in the purple-tinged clip as she writhes and slinks seductively. Most of the scenes show her covered in neon body paint, though it does little to hide her, um, features — not that it seems that she's trying to. Others show her dripping in chocolate syrup and other delectable liquids. The Migos appear fully clothed as they rap their verses if front of a screen where Teyana's image is projected, with the stuttering camera effects making it seem as if we're on some sexy kind of trip.

While it's not certain if "Drippin" is a sign of a larger project coming or just a one-off release, it's very clear that Teyana Taylor surely knows how to grab our attention. Peep the video for "Drippin" below.


TAGS:  kanye west, Migos, Offset, Quavo, teyana taylor
Previous: Sugg Savage Can Help You ‘Fill In The Blank’ Next: Ready Or Not, Nas & Lauryn Hill Are Going On Tour Together