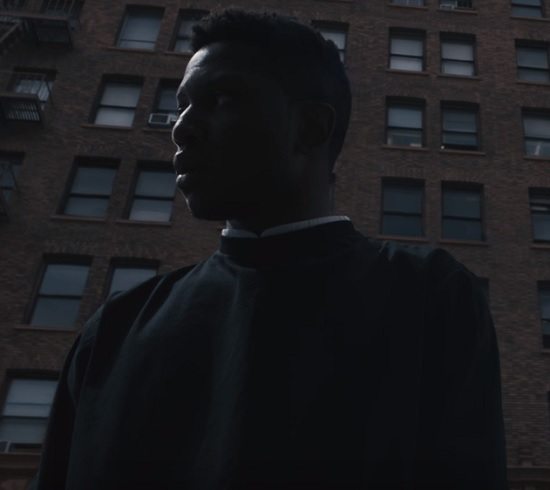 More than a year on, Gallant's debut Ology seems to be the album that keeps on giving. The "Weight In Gold" singer, who is currently touring it up with John Legend on his Darkness and Light Tour (and even took time to do a duet for his "In The Room" series with him), has linked with producer Lophiile and rapper Saba to put a new spin on his single "Bourbon."

If you remember correctly, Gallant invited Saba to perform a version of "Bourbon" during the singer's NPR Tiny Desk Concert. Now we're getting our ears around a more fully realized version. Rather than the '80s quiet storm feel of the original, Lophiile freaks the beat giving it a bit of a modern edge. Synths and drums lead the way as he waxes about needed his love fix like "bourbon in my coffee cup." Saba, meanwhile, puts it down on his feature, kicking swift, smart lyrics as he lets a young lady know that he'd like to be part of her life.

The song's accompanying video features a solo Gallant wandering empty city streets. Though filmed outdoors during the day, the settings are dimly lit thanks to towering buildings that appear to devoid of people. Gallant uses the opportunity to act out the song's lyrics, looking like a man distraught and looking for love. The scene switches, however, for Saba's verse. Neon lights illuminate his skin as he spits in what appears to be a dark alley. The camera soon shifts back to Gallant, who looks at the camera with all the jittery energy of a man looking for his next fix before the camera fades to black.

While we already loved the original "Bourbon," we must admit were also enjoying the smooth sound of this remix. Listen to the song right here and then peep the creative visuals below.


TAGS:  audio, Gallant, john legend, Lophiile, Saba
Previous: Masego Is Looking For Love On ‘Navajo’ Next: This Week In SoulBounce: Mary J. Blige Has To Pay Up, Childish Gambino Drops The Mic, New Nas Is On The Way & More