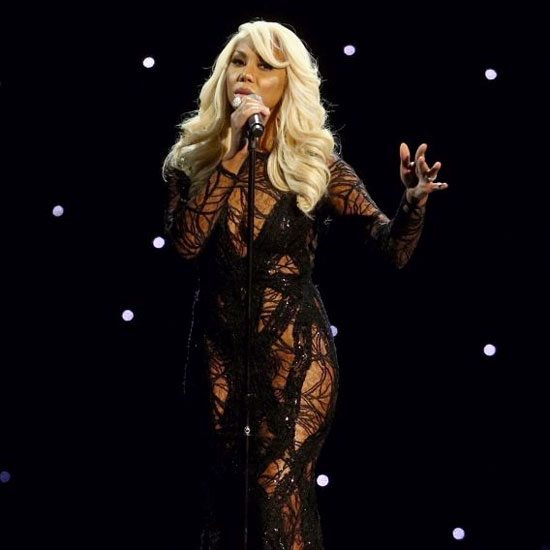 Though she's demonstrated that she can sell records, Tamar Braxton has something to prove with her upcoming album. That's because it'll be her first release as an independent artist. Perhaps that's why she decided to come full force on the BET Awards 17 stage this year with a performance of "My Man."

With the backdrop behind her made to resemble a star-lit sky, Tamar took center stage in a stunning black, sheer gown and dramatic blonde wig (which, if we're being honest, looked a little similar to Kim Zolciak's hair, but we digress). As she sang the story of losing her man to the clutches of the other woman, four couples acted out her lyrics. They moved in sync acting out the day-to-day life and struggles of couples. Then four gum-popping jezebels showed up on stage and inserted themselves into the situations as the women seemed to fight to keep their place. All the while, Tamar performed as she sang of the agony of having your man snatched from you by a trifling heffa you trusted. At one point near the end, Tay Tay even crumpled to the ground as she flung her hair back and forth. All in all, Tamar was giving us flashbacks to some of her sister Toni's performances from back in the day, but with a Tamar twist (like flinging a mic stand behind her for extra dramatic effect).

We think Tamar's performance was right on time, especially after the overlong telecast had hit a slump in momentum. But hey, that's just our opinion. If you happened to miss her BET Awards 17 set, catch it below and decide for yourself if Tamar did the damn thing or nah.


TAGS:  BET Awards 17, tamar braxton, toni braxton
Previous: Xscape Reunites & Brings Back The ’90s At BET Awards 17 With A Medley Of Hits Next: Maxwell Makes His Case With ‘Gods’ At The BET Awards 17