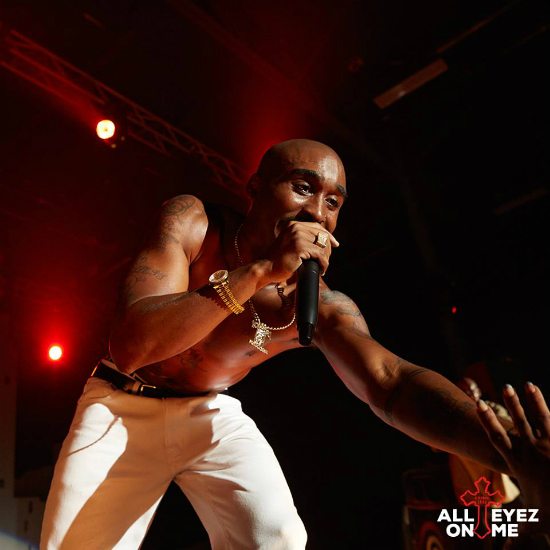 Q: You nailed it as 2Pac! During the film, when you were reading the script and preparing, was there one scene that you couldn’t wait to shoot?

Demetrius Shipp Jr.: The concert. It’s so funny because the day before when we were rehearsing, L.T. was like, “Man, your energy, you ain’t there, you got take it up. We were rehearsing and there was no one in the crowd but I knew the whole time like, “bro don’t even trip, I got this.”

Q: That and the Interscope Records scene was it for me.

L.T. Hutton: Can you believe they tried to make me take that scene out?

LTH: The thing is, a lot of times people are scared of educated young, black men, and even with the control of perception in entertainment, perception is reality. The biggest definition of perception is the vision – he who controls the vision controls the perception, so they’re going to deceive us in a certain way and to some of the people that were supposedly, quote-unquote, in 2Pac’s life, they didn’t like the fact that 2Pac came across in that scene very intelligent. And I said that’s what he’s supposed to be, you know, that’s why we’re making a movie about this guy. So they felt that they were being depicted as dummies, like, “Oh, so 2Pac’s just the smartest guy in the world?” In this case, yeah. You know what I’m saying? So they really tried to take that part out.

Q: One thing I noticed was that it seems like it was really purposeful to showcase different aspects of 2Pac’s personality. How important was that to show those specific points of his personality?

LTH: For most of the movie, I’m pretty consistent and I add a little color to it. But with 2Pac, people have this over-personification of what they thought he was because, if you like sports, if you don’t watch the whole game, you don’t know how good of a game it was if you don’t see the highlights. So the thing with this film, the trajectory is to give you insight to see where he came in these certain scenarios. He didn’t just walk in upset, there was something that triggered that. We criticize people for the choices they make and never understand what they had to choose from. So what I wanted to do was give you an understanding of the things he had to choose from. So you say, "Oh wow, that was a big decision now that I know what he had to choose from." So it’s very important to flesh out that 2Pac had multiple sides. So if you ask your mother who you are, then you ask your friends who you are, and then you ask your boyfriend who you are, you’re going to get three different stories. Which one is wrong? None of them, they’re all right. So with 2Pac, people tend to think that he had one side and one button, which was on 11 at all times, and that wasn’t going to get you closer to 2Pac. So I wanted to give you an intimate look at him so you can really humanize him and understand him — that he was a person. He was allowed to make mistakes, not saying that we forgave him in the film. He had to answer for everything he did.