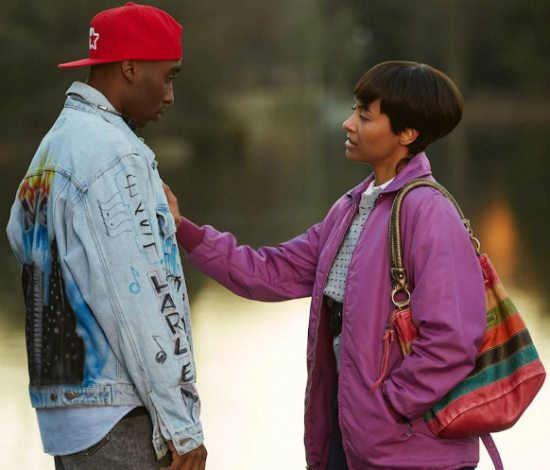 Q: What did you take away from your characters?

Kat Graham: Well, I think for me, I think it's great to embrace being an empowered black woman in this industry. For me, those roles just are few and far between and I’ve had to fight for those and had to seek more of those in Hollywood and in scripts, and directors and projects and know that not only do they exist, but you can be celebrated for them. So I’m hoping that through this film that there will be more empowered roles for black women and a lot of young girls will see that. Because maybe a lot of people didn’t grow up watching Jada or watching Janet [Jackson] in Poetic Justice with 'Pac, and now we have amazing artists like Janelle Monáe, we have Taraji [P. Henson], we have all these other women now that they’re growing up with. But me, when I was growing up, I grew up with Jada, you know what I’m saying? So it’s not just great to pay homage to this woman, because she’s still very much relevant, but it’s also amazing to see people get educated on the beginning of the successful black actress. It really started in the ‘90s with the Jadas and Janets and Queen Latifahs.

Q: Because you have such a striking resemblance to 2Pac, do you feel like that put extra pressure on you to perform this role?

DS: No. Not the resemblance. To me, that was just a foot in the door thing because, honestly, it may not be hard to believe, but there were a lot of people who had the look. I don’t, like, some videos that L.T. showed me, man, there were some dudes who I was like, "I don’t know how they put it together." [laughter] I was like, "Dang, that’s close right there." I mean, L.T. said, at the end of the day, if you can get the acting down, you can have a great run with this.

Q: You were very intentional with making the movie. What would you say was your 1 biggest challenge in telling 2Pac’s story.

LTH: Wow, there were so many challenges, and that’s what I want you to understand. In Hollywood, we’re still talking about “the first Black.” In 2017, we’re still talking about “the first Black,” let’s be clear on that. So in looking at it, Kat Graham, Demetrius Shipp, by looking at them on the screen, you would think they were a shoe-in. I had to fight for both of them. I had a huge argument, and they said L.T. was crazy and all this, but I was just not going to let Hollywood make me do something I didn’t believe in. Demetrius, I had him all along the entire way but he didn’t physically get hired on the job. Production was up, you know, and he was getting nervous, but I told him, “I got you.” He didn’t physically come on until November 18th, we started shooting December 17th, you understand what I’m saying? And that day, I turned over a few tables, said I’m leaving the project, I’m done and packing up. I’ll do the movie somewhere else and I’m not gonna do it with this particular company because this is the guy. For Kat, for me, she sound like Jada, she look like Jada, she has Jada’s bubbly spirit and brought what we need.

This is a vision I had from day one. So if you couldn’t share the vision and come in being not self-serving, and if you didn’t come to serve 2Pac and 2Pac’s mission and 2Pac’s voice, and you came in thinking it was going to be the 2Pac and I story or I Had A Long Walk With 2Pac or 2Pac Was My Friend story, then it wasn’t going to happen. There are certain things you have to fight for to keep that integrity and that’s pretty much what I did throughout. So it wasn’t just one. I’m still fighting right now. The movie comes out next week and I’m still screaming.

Q: The movie ended as soon as he died, but what was your decision with that?

LTH: The concept is that you go into this film and the No. 1 thing that everyone knows is that 2Pac passed. We know that. But the genius thing would be to take you on a journey that’s so interesting, that you enjoy so much that you actually believe that he’s not going to pass. [SPOILER] If you notice, he doesn’t die in this movie — he’s not dead. You see the spirit and the light go out of his eyes but we don’t kill him in this movie. It keeps the beacon of light and the hope going. The reason why we stopped there is because after he’s gone, there is no more. So to perpetuate the stories of what happened after he died, he’s gone, he’s not here. I wanted to leave it in that cautionary tale in that moment for you to absorb and understand that this man died at 25. That’s not a good thing. He could’ve been so much more. The theme I created around this movie was who 2Pac was, who he wanted to be and who he had to be to survive the worlds that he was in. So with that thing, I called it the holy trinity. You always knew, whatever point of the film you’re in, people say, "Oh that’s who 2Pac was." Or other parts, that's who he wanted to be – like some of the wild parts. "Oh that’s who he had to be to survive those things." I was able to give you a full complexion of this man and how he walked through life and how he dealt with certain things. The ultimate being the death sentence — there’s nothing else after that. So when it goes quiet, I want the world to understand, it’s quiet. It needs to resonate, to the kids in Chicago, the kids in Baltimore, to the kids in just inner cities in general, that this game you’re playing, to take somebody’s life for nothing, it’s black. There’s no coming back from that. But if you’re alive, you can do something about it and correct your wrongs. It doesn’t have to end this way. Take this as an example. So I feel like he entrusted my spirit with showing what his life meant. Ending it like that is a wake-up call because I wanted it to shake you like it shook us in 1996.