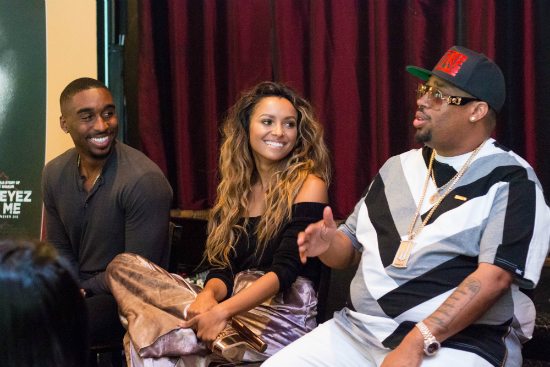 Q: During the film, what did you learn about 2Pac as opposed to all of the research you did?

DS: Really just the people that were around. I learned a lot of the relationships. Treach came onset. I didn’t necessarily know that Treach and him were boys like that. I didn’t know the details of their relationship and he gave me some great insight. And the Outlawz, they were there, they were in the movie. It was just speaking to people who were in his life. And what would I ask 2Pac? I couldn’t just ask him one question.

Q: There are so many different layers of 2Pac. Which Pac resonated for you personally?

DS: The passionate person that he was. Everything that he did was out of passion. All this work, the revolutionary, the passion that he had that he watched when he grew up around the Black Panther Party. His work ethic, believing in himself, the passion always came out in him. In interviews, he wasn’t always the one who was just rah-rah. When he was passionate about something, it always came out if you talked to him long enough. Like L.T. said earlier, 2Pac pretty much used his interviews as his pulpit. That’s really true if you look at it and that’s what resonates for me.

Q: Are you concerned at all with being typecast?

DS: No, not at all. I have the ability to grow hair and stuff. I had to bring what he meant, you know, inviting him. The next role I get, I get to put my own on it. So the next character, it’s not as much pressure because I’ll get to make it my own.

Q: I mean you talk like him and everything… [Laughter]

LTH: And let’s be clear, there are so many films that were left behind for a 2Pac-esque character. I don’t feel like he’ll ever be typecast. I mean, you’ve seen the movie. This kid’s incredible. I discovered this dude and y’all didn’t believe him. Look what he did. They’re going to have to consider him for a statue, to be a first-timer and deliver. And, like, the thing about 2Pac is 2Pac never had to play himself. That was a heavy order and a tall order to fill, but my man did that.

Q: I know you actually had a personal relationship with 2Pac. What is your favorite thing about 2Pac that people don’t know?

LTH: I can’t say it’s that people don’t know it because, to be around Pac, you had to have your A-game at all times because he was a person that — and I really took this trait from him because he made me look at what can be done versus what can’t be done — he never took "No." Like, he was like, “Oh, you can’t do that. I’ll go do it myself.” To the point where he was in the studio turning knobs and stuff. He couldn’t mix but he’d try to take over. He just had a can-do spirit, that resonated with me the most. Even when the money wasn’t right, he never sat around and complained about his situation. He kept working in spite of. At all times he was being creative.

We gave you a look inside of the man. You’re not really watching the movie, you’re in the movie. We didn’t want to perpetuate the nonsense. There was a lot that he wanted to do, that he just didn’t get a chance to do, so we wanted to set the path to give you an idea of what he could’ve been if he would’ve lived. Just the thug side wouldn’t give you the full perception of 2Pac. So we had to give you all the sides to understand that he was complex. So when I created the framing device with the interview, which was Hill Harper, I used him as the audience, for him to ask those challenging questions you wanted to know. So he poked him, and that conversation with them, we started with that in the opening of filming because I was going to put him in a 2Pac boot camp where Hill grilled him and he had to know the information to come back unscripted to the point where, if he didn’t know the information, it wasn’t on the table. That first day he went home and he went even deeper because he wanted to make sure that when he came back to set the next day, he’d get Hill Harper back.

DS: At one point I snapped,and Hill was like, "That’s what I’m looking for."