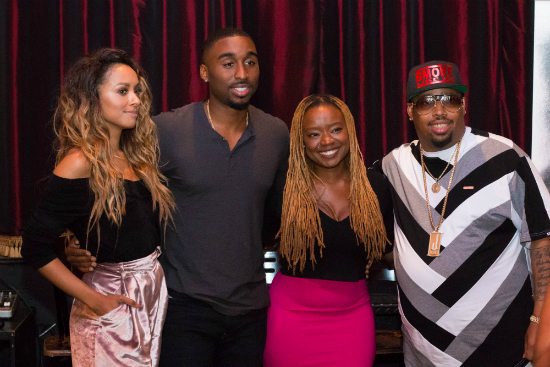 Q: What do you want audiences to take away after watching the movie?

DS: I just want people to have a full understanding of his life. Like L.T. said, you see the actions but you don’t understand the choices. For people who loved 2Pac the poet or the rapper, I want this to be a full thing. Like, if you love him for this reason and now you love him for it for even more reasons. If you didn’t know who he was and you just heard the stories, now you have an understanding of the things that you heard. Just a whole glimpse of his life.

KG: I would say he was so prolific and so ahead of his time. I don’t know anyone who doesn’t know who 2Pac is, so you’ll definitely leave this film understanding who he was and all the layers he had, the good and the bad. And understand a little bit better what made him tick and the women in his life.

LTH: Me, personally, I couldn’t dare say one thing. The film wasn’t designed just for the 2Pac film. 2Pac always wanted his life to be that inspiration. I may not change the world, but I guarantee that I spark the brain that does. This film, we want it to be the spark. This film is that inspiration. This film is that hope. This film takes the excuses out of everyone who says that they can’t because if he can make it in spite of all that he went through and accomplish all that he accomplished by the age of 25, then anybody can do anything. You’re not measured by monetary gain. It’s not about how much money you got, it’s about what’s your legacy. What are you going to leave behind? Who did you inspire? Who did you help? Hopefully, this film reaches and touches the masses to understand what we lost. And it just has to be a celebration of a man who was cut down in his prime over whatever the reason was we lost him. Nothing is more important than life.

Q: What is your vision and goal for upcoming movies?

LTH: It’s to create a new Hollywood to refuel the pond – the lack of opportunities for us in Hollywood is astounding. I can’t even believe it. Other films, you’ve got about 70 coming this summer and then we have All Eyez On Me. And then when you have All Eyez On Me, they want to put us against something like the two that came out in the last three years and you got some ignorant people that say don’t support this and don’t support that.

SB: What is your vision and goal for upcoming movies?

LTH: I designed Straight Outta Compton, All Eyez On Me to become edutainment pieces, like Marvel Comics. So one will set up the next, that one will set up the next, this one will set up the next. I mean, I have other films that I'm doing that are not biopics, but you will see a collection of films that answer where one film left off. So where Straight Outta Compton and All Eyez On Me leave off, you're going to see my Death Row story, which is the sequel to both of those. So Death Row Records is the sequel to N.W.A and All Eyez On Me and you will see all the after-death stuff and the conspiracy theories and all that. We were going to do it as a docuseries, but in two hours and 30 minutes, we'll give you just enough. We don't want to take four years to make a series.

All Eyez On Me is in theaters now.