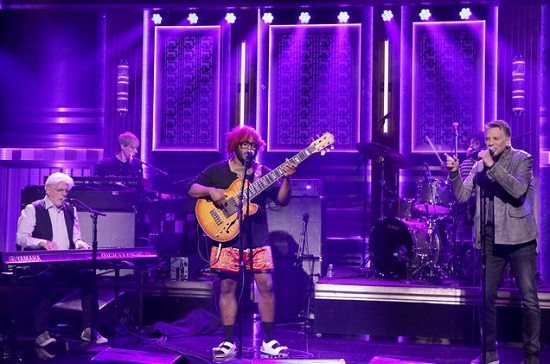 It's not every day that a current generation badass like Thundercat gets to record with musical legends like Kenny Loggins and Michael McDonald, but the modern funk character got to do just that on Drunk lead single "Show You The Way." As if that weren't magical enough, last night, Thundercat, Kenny and Michael recreated the track on The Tonight Show Starring Jimmy Fallon stage. What a time to be alive!

The performance, which wasn't announced until last week, was Thundercat's Tonight Show debut and the bassist made the most of it. Stepping on stage in a black tee, red-and-gold shorts, white sandals and black crew socks and sporting bright red hair, the Cali native held his own with Kenny and Michael, who also assisted on keys. Each of the fellas seems to be having a good time, even keeping the silly intros of each other just before their verses. The musical chemistry is undeniable however, with the three seeming as if they've performed together for ages, from the tight harmonies on the chorus to the way that Michael and Thundercat play off of each other on the instrumental arrangement. However, the best part comes near the end, when Thundercat takes off on a bass solo and the fellas run right along with him.

Thundercat is currently on a massive tour spanning North America and Europe, the remaining dates for which can be found after you take a look at his debut Tonight Show appearance below.