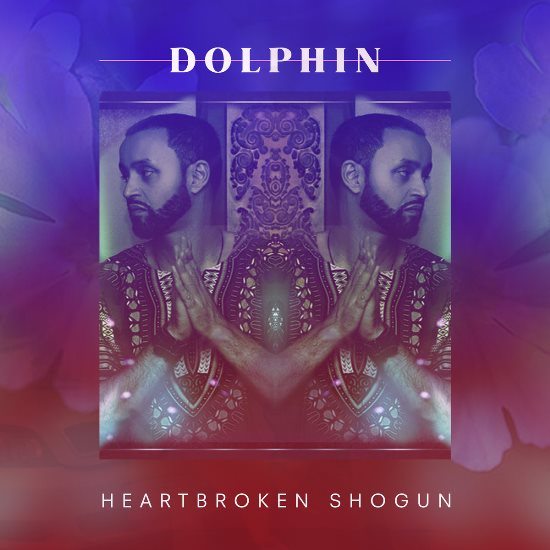 Dolphin is what we like to call an old soul, and we mean that as a compliment. The Brooklyn-bred artist who now claims "Ancient Baltimore" as home has always operated on a musical plane that hovers between time and space, embracing vintage soul roots while reaching forward into experimental sounds. The fact that he wields many talents – among them multi-instrumentalist, singer, songwriter, producer – and has over 50 unreleased albums to his credit further validates the breadth and depth of his artistry. Not that he has anything to prove. Perhaps that's why his project drops have been so sporadic over the years. That's about to change, however, with the impending release of his new EP The Heartbroken Shogun.

From his wavy EP Omni and his engrossing musical film Iota to poignant singles like "Young Black Mind" and "Mythos (Myth of Magnets)," we've come to expect a certain level of soulful somber and laid-back chill in Dolphin's music. But if the titular single from his upcoming project is an indication of what's to come, Dolphin is about to deliver some serious funk. With its sticky bass line, static percussion and groovy guitar licks, "Heartbroken Shogun" is an infectious groove born of electro-funk and '80s R&B. As Dolphin's smooth vocals float over shimmery keys, we couldn't resist the urge to dance (and neither will you).

While we wait for the August 7th release of The Heartbroken Shogun, take a listen to the title track and then keep the '80s groove going with "Hurt People." Purchase the track via Bandcamp and follow Dolphin on Twitter and Instagram for album updates.


TAGS:  audio, Dolphin
Previous: 112 Returns To Bring Some ’90s Flavor With ‘Strawberry’ Next: Elijah Blake Isn’t ‘Stingy’ With The Funk On His Latest