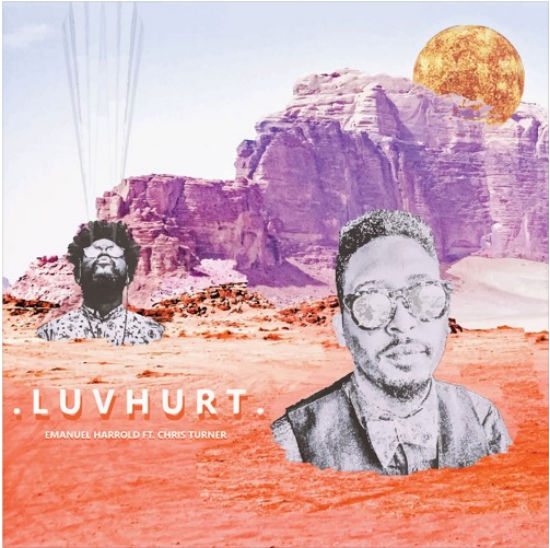 On his new single “ Luv Hurt,” GRAMMY Award-winning drummer/composer/producer Emanuel Harrold has some wise words for when life seems to be working against you. Harrold teams up with SoulBounce fave Chris Turner for a beautifully painful tune about the struggle to hold on to love.  The track is laced with intense elements of funk, jazz and plenty of soul. Though angst and torment is felt in everything from the drum kicks to the guitar riffs, there’s a fighting determination that comes through in Turner’s voice as he sings, “Love hurts right now / I need to hold strong.” It all exudes the defiant energy that is sometimes needed in order to fight the urge to throw it all away.

Harrold’s inspiration for the track, however, wasn’t drawn from heartbreak at all. Instead, he says, “The inspiration in writing ‘Luv Hurt’ came about as I was thinking on who I was as a person, what I enjoy and how did my upbringing influence me to this point. Being true, embracing what’s in front of me and giving my all has allowed me to remain humble.” Staying humble might prove challenging since, after winning two GRAMMY Awards for his stellar work with singer Gregory Porter, Harrold seems to be on a trajectory that may make it hard to stay grounded. He’s played over 2,000 shows at acclaimed venues such as Buckingham Palace and the Sydney Opera House; he's performed on Jimmy Kimmel Live, The Tonight Show with Jay Leno, The Tavis Smiley Show, the North Sea Jazz Festival and the Berlin Philharmonic; and has toured over 50 countries. Now, as he prepares to release his debut EP this fall, all the energy and anticipation building around him and his new project will call for him to be even more resilient than ever before. Given his talent, dedication and passion for his craft, we have no doubt that he will “hold strong” and continue to win.