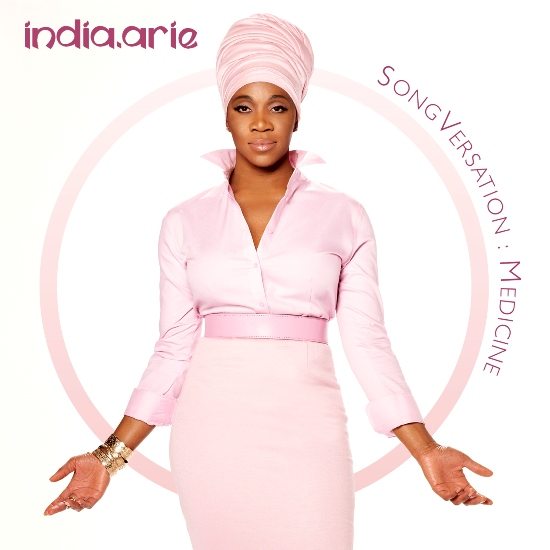 Singer-songwriter India.Arie has used music to promote positivity and self-love ever since her acclaimed 2001 Acoustic Soul debut. Subsequent offerings have touched on various subjects such as injustice, healthy relationships, self-discovery and spiritual growth, but all with the same inspirational thread that keeps us coming back for more. In an age where many artists change their sound as often as they change their look, India has somehow managed to evolve into a more complete version of who she always was. And her latest project, an extension of her 2013 album SongVersation, labels her distinctive sound for exactly what it is...Medicine.

While fans will already be familiar with lead single "I Am Light" and the Eric Garner-inspired "Breathe," SongVersation: Medicine has much more to give. The songstress explains that the album "was made to be listened to in a quiet time, prayer, meditation, Yoga.” With song titles such as "Just Let It Go," "Light of the Holy Spirit" and "Chicken Soup In A Song," Ms. Arie is quite transparent with her intentions. She is on a melodic mission to foster healing and enlightenment through music. The cathartic lyrics combined with acoustic sounds and her fluid, soothing tones have an immediate affect on the listener. And while you may hear various chants such as "Selah," "Namaste" and "Hallelujah," she's not pushing a religious agenda. Her only wish "is that these songs bring softness, clarity, calm and inspiration.” It's hard not to feel refreshed and renewed after listening to this project, especially as it ends on a joyous note with the upbeat tune "Life Is Good."

SongVersation: Medicine is currently available via Amazon, iTunes and all major digital retailers. The EP isn't the only way India.Arie plans to spread her message. She'll be joining Oprah Winfrey, Gayle King, O, The Oprah Magazine editors and more aboard the “Share the Adventure Cruise to Alaska” on July 15th through July 22nd. Afterwards, she will be teaching The SongVersation Practice at Berklee College of Music in Boston this fall.