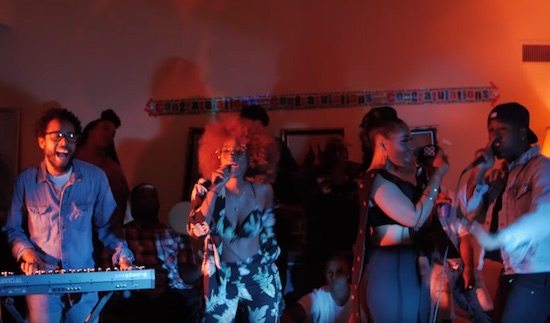 Terrace Martin and The Pollyseeds' Sounds Of Crenshaw Vol. 1 hasn't left heavy rotation since it was released a few weeks ago. The album is giving us everything we love, need and want when it comes to music. There's jazz, there's soul, there's hip-hop and there's even a little G-funk as heard on lead single "Intentions." The song that introduced the world to this supergroup and project has now gotten a music video, and it's quite a celebration.

Core collective members Rose Gold, Wyann Vaughn and Chachi (the artist formerly known as Problem) join Terrace to celebrate the Class of 2017 at a graduation party in "Intentions." Filmed on location in Los Angeles and directed by The ViLLAGE, this party is a festive affair that starts off as a kickback and cookout before things really get popping at the house party. Terrace and The Pollyseeds set things off with a performance in the middle of the living room, and things really get live as Chachi rocks the mic while Rose and Wyann sing and look pretty. Throughout the video partygoers are having a good time, playing cards and dominoes, dancing, smoking, drinking and just vibing. This shindig looks like it was so much fun that we hope we get invited to the next function.

While we fight FOMO, something you don't need to miss out on is adding Sounds Of Crenshaw Vol. 1 to your collection if you haven't already. Cop the album right now on Amazon, iTunes, Google Play or Bandcamp on Ropeadope Records.


TAGS:  Chachi, Problem, Rose Gold, terrace martin, The Pollyseeds, The ViLLAGE, Wyann Vaughn
Previous: BOSCO Gets Our ‘Adrenaline’ Pumping With New Music Next: Does Cassie Have A Winner With ‘Love A Loser’?