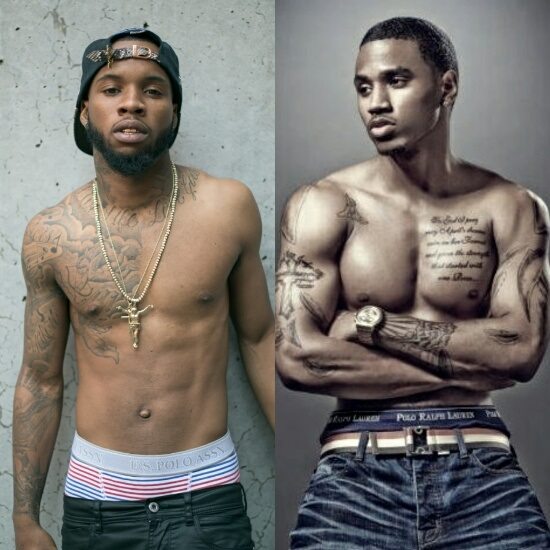 It's pretty safe to say that DJ Khaled's "Wild Thoughts" is a summertime hit. The Rihanna- and Bryson Tiller-featuring jam can be heard across radio waves, coming from headphones and bumping from cars speeding by on the regular. Given its ubiquity — and being that it lifts a rather large portion of a hit from yesteryear, Santana's 1999 hit "Maria, Maria" — it's not that surprising that a few people want to take the track for a ride. Enter modern-day R&B crooners Tory Lanez and Trey Songz.

The twosome comes together to put their own freaknasty spin on the already risqué song. Rather than give us a bit of an intro, though, they get straight to raunchy business with Tory taking the lead. "I don't know If I can take it / But I know I love it when you get naked, naked / Breakfast in bed when I taste it / Good head, p***y wet just to chase it," he wails at the song's start, his signature tone sounding as if it was just slightly touched by the Auto-Tune fairy. From there, he unleashes a stream of consciousness verse ranging from braggadocio to bedroom shenanigans, with colorful language and metaphors sprinkled throughout. Trey, however, is somehow much more direct. "Heard that p***y for the takin' / Know that p***y feel a-muhf**kin'-mazing / Bet it's sweeter than a pastry / Cake, cake, yeah like a muhf**kin' bakery," he sings before he requests to put his "face in your waist." Interestingly enough, despite all the raunch, smooth bass and Spanish guitar, their take just doesn't feel that sexy. Perhaps they just lack the sexy playfulness that RiRi brought to the affair (or maybe they're just trying too hard to be as nasty as they wanna be).

The crooners' take on the track might not be our cup of tea, but we have a sneaking suspicion that fans of both artists won't mind their overdone lusty overtures. The only way to find out, though, is to give Tory Lanez and Trey Songz's take on "Wild Thoughts" a spin below.