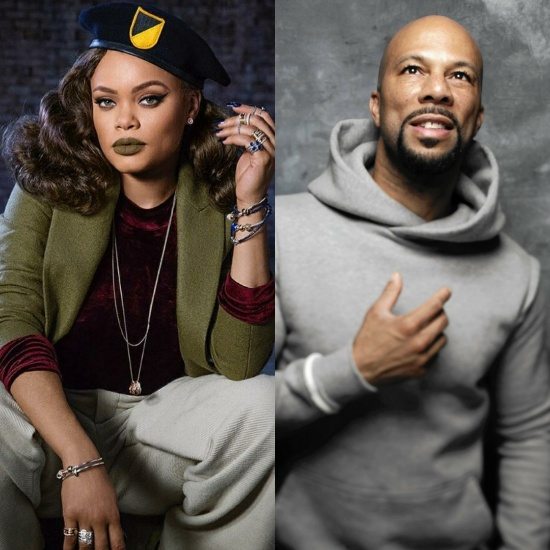 Last year, Andra Day appeared on Common's "Letter to the Free," a powerful track that was featured on his album Black America Again as well as Ava DuVernay's staggering documentary 13th. Now, the Chi-town rapper returns the favor as the two artists team up with venerated songwriter Diane Warren for "Stand Up for Something." The song is our first listen of the soundtrack for Marshall, an upcoming biopic about Thurgood Marshall, starring Chadwick Boseman as the young rabble-rousing NAACP attorney facing the toughest challenge of his early career – almost 30 years before he became the first African-American Supreme Court Justice.

Like her rapping collaborator, the retro-chic songstress already has a major motion picture soundtrack credit on her resume. What makes this song stand out, however, is that it marks the first time she makes an appearance in the actual film itself. “I was so moved by the story of Thurgood Marshall,” Andra says. “It was an incredible honor to not only be asked to record the lead single, but also appear in the movie...This is such an important project. I’m thankful to be a part of it.”

On "Stand Up for Something," bold drums, Sunday-morning organ, down-home guitar and doo-wop harmonies provide an ear-catching backdrop meaty enough to bear the weight of Andra's vocals and the subject matter as well. Ms. Day never fails to impress with her vintage style, bluesy charm and powerful vocals. But there's something special about this particular track. She delivers the kind of passion and grit typically reserved for her live performances. In other words, Andra let loose in the studio. Like she just got up in church and gave a deliverance testimony in song, Eddie Kane-style. You can feel it in your bones when she sings, "It all means nothing if you don't stand up for something / You can't just talk the talk, you got to walk that walk (yes you do) / It all means nothing if you don't stand up for something / And I'll stand up for you."

She's so convincing that Common's verse almost falls flat in comparison. The lyricism is there, but we needed "Glory" Common: The Oscar Winner to match her intensity. Still, there's no denying that the song is incredible. Ms. Warren thinks very highly of the song as well, gushing, "I am more proud of this song than any other I have ever written." Y'all, this is a woman whose mantle is full of awards and has worked with one-name divas like Whitney, Celine, Chaka, Mariah and Cher. So for her to say that should tell you just how special this song is.

Listen to "Stand Up for Something" below and judge for yourself. The track is available for purchase via iTunes ahead of the full soundtrack release on September 15th. Marshall opens nationwide on October 13th. In the meantime, peep the trailer below (we see you, Andra!) and make plans to support the Reginald Hudlin-directed film.