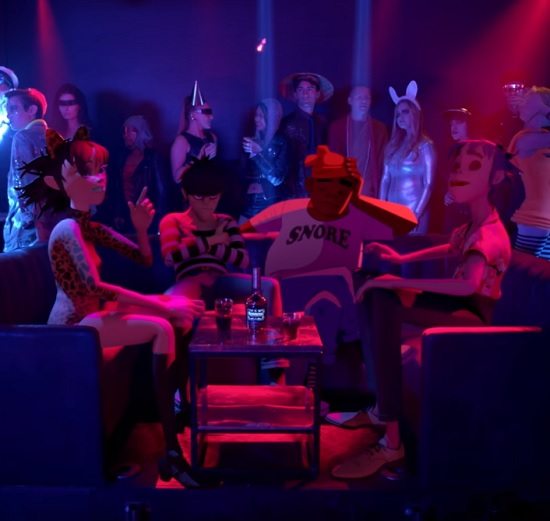 With their latest album Humanz, Gorillaz embraced a more R&B- and dance-leaning sound than on previous works, so it only makes sense that the set's most danceable track, "Strobelite," finally get a video. The track, which features the vocals of Chicago house luminary Peven Everett, is a jam and a half and is treated as such in the energetic and brightly colored visual.

We open on what looks to be a wack DJ playing uninspired, nondescript EDM music. Thankfully, he's quickly knocked the [expletive] out and the jammin' disco groove of "Strobelite" begins. The beat switch invigorates Noodle, who's chilling with her CGI'd bandmates in the cut, and she takes over the dance floor. 2D soon joins her just before Peven starts his soulful verse. He's just as animated as the band, rocking a gold lamé jacket as he spins and bounces all over the place. As the clip progresses, we see Gorillaz bassist Murdoch score some kind of hallucinogenic drug from a man wearing an obvious disguise and a few cameos from Humanz collaborators, including Vince Staples and De La Soul's Posdnuos. However, the main event is 2D and Noodle, who dance like no one's watching, taking us to a trippy place where the dance floor becomes everything from a video game to a Rubik's cube as they cut a rug.

You can find "Strobelite," as well as a few other slept-on tracks, on Humanz, which is available now in both standard and deluxe editions, and catch the video below.


TAGS:  2D, de la soul, gorillaz, Murdoch, Noodle, peven everett, Posdnuos, Vince Staples
Previous: Jodeci’s Mr. Dalvin Is Out For ‘Vindication’ Next: Will Downing & Avery*Sunshine Are ‘Feeling The Love’ As He Announces The Release Of His 20th Album, ‘Soul Survivor’