QUIÑ & Syd Are Caught Up In A ‘Sticky Situation’ 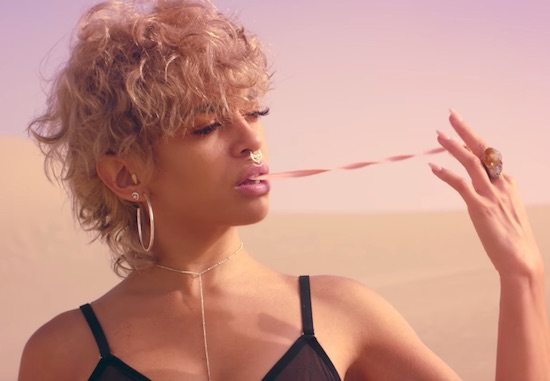 QUIÑ has been making moves and music since we were first introduced to her late last year with her debut EP, Galactica. The "fantasy soul" singer is prepping the release of her next EP this Friday, and she just rocked the AFROPUNK stage this past weekend in Brooklyn. One of the songs that she performed at AFROPUNK was her current single, "Sticky Situation" featuring Syd, and she brought the summer scorcher to life solo.

Released earlier this month, "Sticky Situation" finds QUIÑ and Syd trading verses about a relationship that has quickly gone from sweet to bitter and they're both trying to be out. Their candy-coated kiss-off is pretty slick and at times blunt. QUIÑ starts the song already over it but tries to keep the peace as she sings, "I don't wanna fuss and fight / Sick of arguin' and all the lies / To tell you the truth, you got me thinkin' twice / Thought I got it right." Syd, on the other hand, follows up with some particularly scalding lyrics, singing, "I ain't really trippin', babe / You weren't the one I wanted anyway / I only pursued you for the booty, babe." Damn. Both ladies slip and slide over Krys$hun's electro-soul production and make for a good duet.

For the "Sticky Situation" music video, Syd isn't present but QUIÑ is joined by her lady love in the dessert. Despite clearly wanting to kick her to the curb in the song, they are quite cozy in the visual directed by Gerald Bush and Christopher Renz. There's some mild tension between them throughout, but there's also frolicking, smiling and the lovely pair driving off into the sunset and sharing a lollipop. It looks like this situation will only get stickier.

Watch the music video and stream "Sticky Situation" via Spotify right here, and if you're digging it as much as we are, then cop the track via your favorite digital retailer. Stay tuned for QUIÑ's next EP, DREAMGIRL, which will be released tomorrow, September 1st, with additional features from 6lack and Buddy.