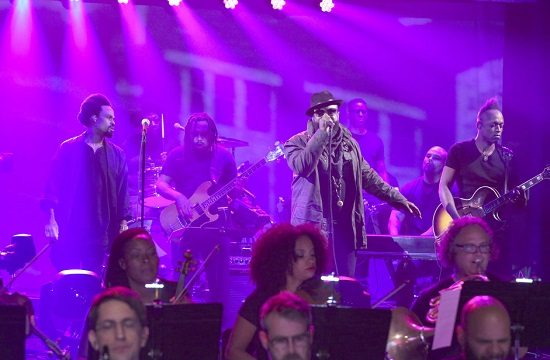 Detroit might be getting mixed reviews and low returns at the box office, but one thing that the film has going for it is its soulful soundtrack. That's especially true of The Roots' collaboration with Bilal, "It Ain't Fair." We've already heaped praise onto the track, calling it "an engaging soul track that does more than just retread the past but celebrates its legacy loud and clear." The same can also be said of their recent performance of the track on The Tonight Show Starring Jimmy Fallon.

With an orchestra seated before them, the band and singer took the stage for a thoughtful performance. Bilal started off the performance with the song's quiet opening verse. However, the energy soon grew and the tempo increased as Black Thought tore into the track with his fiery verse. The collection of musicians played the tension of the faster-paced verses and the quieter moments of the sung portion quite well, infusing the song with an intense urgency that matched its subject matter. In fact, as the song progressed, Bilal got caught up in the moment and had to walk off the stage at the end.

While many would agree that The Roots playing every night on the venerable talk show has always been a good look, moments like this where the crew gets to really give the audience a musical blessing are the most amazing. Take a look at the memorable performance below.