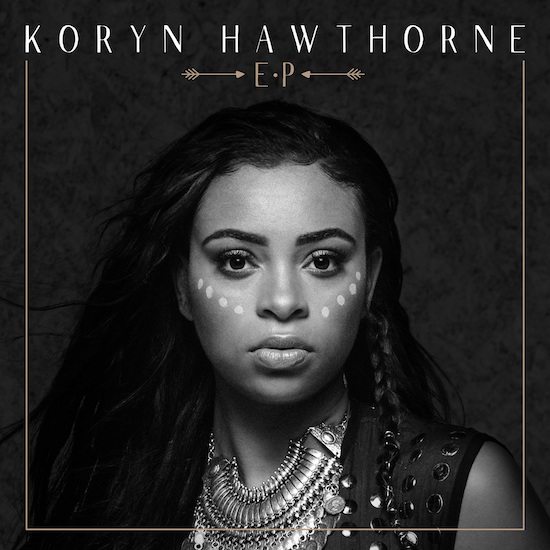 In season eight of NBC's The Voice, a then-unknown hailing from Abbeville, Louisiana named Koryn Hawthorne blew the judges away with her powerful vocals, eventually resulting in her placing fourth in the competition. Although her path didn't take her to the top spot, her journey is far from over, as indicated by the release of her debut self-titled EP that dropped today.

For the four-track Koryn Hawthorne EP, Hawthorne tapped hitmakers such as Warryn Campbell, Makeba Riddick-Woods, Joaquin "The Bear" Bynum, Bernie Herms, Aaron Lindsey and Kid Classic. Though her time on the vocal competition saw her tackling a lot of power ballads and infusing them with her gospel roots, her first solo outing finds her leaning heavily towards the latter in this collection of uplifting songs. "To work with producers of this caliber is amazing. There's no greater feeling than being able to create with people I have looked up to for so long," Koryn says about working with such a talented roster of artists. "After working with these amazing individuals, I have even more confidence in myself and in the distinctive approach I take with my music."

Koryn Hawthorne EP opens with the arena-rock influenced "Warriors," where she challenges listeners to stand strong in the fight before she flexes her golden voice on the driving "Speak the Name," which also serves as the second single taken from the EP. Meanwhile, "Reasons," finds her rattling off the list of things that keep her devoted to serving her Lord and Savior, Jesus Christ. She closes things out with a remixed version of her debut single, "Won't He Do It." Even though four tracks is way too short for a talent as good as hers, it serves as a reminder of what left two judges, Christina Aguilera and Pharrell Williams, vying a chance to mentor her. With positivity and optimism flowing freely throughout, Hawthorne's first solo outing could be just what you need to make it through some tough times.