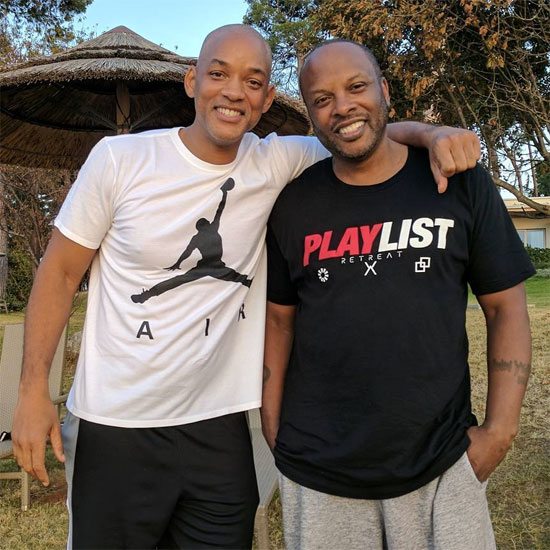 Will Smith and DJ Jazzy Jeff reunited onstage this past weekend at the Limewire Festival in Blackpool, England. Scores of fans gathered to see the legendary hip-hop duo perform their classic hits, and they were treated to quite a surprise. Two of Philly’s finest seized the opportunity to debut a brand new song entitled “Get Lit,” and the performance was just that.

The explosive EDM track marks their first collaborative effort in nearly a decade, although it isn’t what we are used to hearing from the former Fresh Prince and our favorite DJ. "Get Lit" begins with a reggae-charged beat, before gaining intensity with pulsating drum kicks. During this time, Will says to the crowd, “Let me see those lights. We’re gonna brighten up the darkness in this world.” We watch as the excitement of the crowd builds along with the track just before the bass drops and everybody goes wild. The strategic light show and pyrotechnic effects are the perfect complement to the already vibrant tune.

Though we haven’t seen him in this capacity in quite a while, it’s clear from the footage that Big Willy hasn’t lost his musical touch. He soaked up the energy from the audience like sunrays and was truly in his zone onstage. It seems he drew inspiration for the lyrics from the chaos and hatred going on worldwide saying, “I wanted to make a song that allowed people to let their light shine. Sometimes in this world, people can say stuff to you and tell you what you can’t do, and you know you can, but when they tell you that it kinda knocks you down a bit, right? So, I wanted to make a record that reminded each and every one of y’all to let your light shine.”

While there’s no word on whether this new track is a sign of things to come from the duo, Will may have dropped a not-so-subtle hint regarding his next move in the lyrics saying, “Good before evil / Big Will the sequel ’bout to get lit.” Years ago, we were teased with the news of a comeback that never came to be, so once again we will just have to wait and see what’s next from the truly dynamic duo. In the meantime, check out the live performance of “Get Lit” from Will Smith and DJ Jazzy Jeff below.


TAGS:  dj jazzy jeff, Fresh Prince, will smith
Previous: Andra Day & Common Inspire Us To Take A ‘Stand’ Ahead Of Thurgood Marshall Biopic Release Next: Musiq Soulchild Practices The Power Of Persistence With ‘Sooner Or Later’