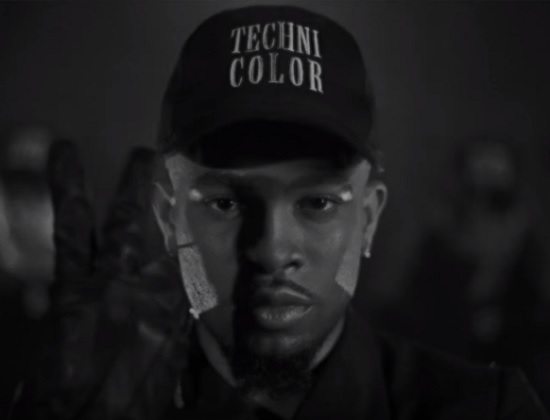 Prince. Michael Jackson. Janet Jackson. The names speak for themselves. They ruled the '80s with an iron fist and continue to inspire us with their greatness, even those of us who weren’t around when they topped the charts. ‘90s baby Elijah Blake, the pen behind today’s superstars such as Rihanna and Justin Bieber, pays homage to the legends of not-so-long ago in his video for his single, “Technicolor.”

“Technicolor,” an uptempo new wave-esque funk ballad reminiscent of Prince, sounds like something you might have heard on the radio in the '80s. It’s only fitting that the clip for the song takes some ideas from the same era. The video starts with Elijah walking into a loft studio, grabbing a blue jean jacket and proceeding to do some of the choreography from Janet Jackson’s “Pleasure Principle” video. He then segues into Janet’s video for “Rhythm Nation,” decked out in military gear and flanked by dancers hitting the signature eight-count moves to perfection. We’re then treated to Bobby Brown’s “Every Little Step” video, as Elijah gives us the signature Gumby haircut and flailing dance moves. We also check in with Bobby’s former bandmates New Edition for “If It Isn’t Love.”

Not to spoil the rest of the visual, but we get a few homages to Michael, Prince and a few other stars. You can tell Mr. Blake was trying to make a dollar out of 15 cents to complete his vision. But he makes it happen from the dance moves to the costuming, perfectly capturing the feel of these past musical epics.

“Technicolor” is featured on Elijah Blake’s sophomore LP Audiology. The project follows his 2016 EP Blueberry Vapors and 2015 debut album Shadows & Diamonds. Appearing naked on the cover, the album represents the artist's freedom and exploring his sense of self. You can join him on his journey of self-discovery, as well as a scenic detour through the ‘80s, by watching the video below.