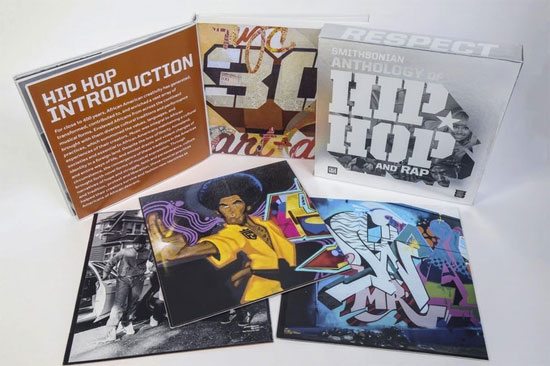 Hip-hop’s place in history and impact on music, culture, society and the world for the past 40 years cannot be denied. The Smithsonian Anthology of Hip-Hop and Rap wants to make sure that never happens with a recently launched Kickstarter fundraiser that aims to make #HipHopHistory.

The National Museum of African American History and Culture is partnering with Smithsonian Folkways Recordings to create the Smithsonian Anthology of Hip-Hop and Rap book and box set. Hip-hop luminaries, including performers like MC Lyte and Chuck D of Public Enemy, as well as historians and executives like Cheryl Keyes and Bill Adler, have contributed to the project. The esteemed collection will contain a 300-page book with 10 essays, extensive liner notes and never-before-published images and nine-disc box set featuring more than 120 classic hip-hop tracks. Contemporary producer 9th Wonder will also be contributing an exclusive remix only available to backers of the project pledging $100 or more.

This project will only become a reality with the help of hip-hop fans like yourself. The organization is asking for people to make donations to the Kickstarter to raise $250,000 towards the cost of producing the anthology. Backers have the chance to receive the anthology at production cost, limited edition art, memorabilia and a once in a lifetime tour of the NMAAHC by none other than Questlove of The Roots.