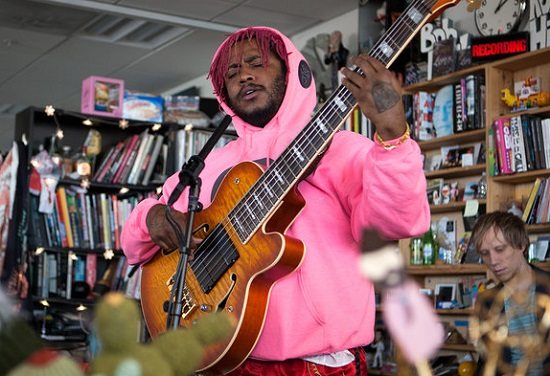 Let's just go ahead and say it: Thundercat is a musical genius. The bassist/singer/songwriter has had us hanging on his every note for years now and seeing him live is quite the experience. What's that? You haven't had the pleasure? Well, that's just a crying shame. Thankfully, we have exactly what you need as the "Show You The Way" singer happened to recently make a stop in D.C. to perform for NPR Music's Tiny Desk Concert Series.

A neon-pink hoodie-clad Thundercat showed up with his band (which was comprised of Miguel Atwood-Ferguson, Dennis Hamm and Justin Brown) took the audience through the paces as they performed Drunk tracks "Lava Lamp," "Friend Zone" and "Them Changes." Thundercat wasted no time during his set, starting with "Lava Lamp" and only taking a break to sip from his coffee cup in between songs. But the continuous pacing didn't shortchange the audience. Though his performance was absent of banter, he instead spoke through the music, stretching out tracks and adding funky flourishes wherever he felt necessary.

Sure, watching the performance from the comfort of your laptop isn't the same as sitting in the audience as Thundercat plays your favorite songs. But we can say in all honesty that watching such an intimate performance is definitely the next best thing. Check out Thundercat rocking the NPR Music offices during his Tiny Desk Concert below.


TAGS:  Dennis Hamm, Justin Brown, miguel atwood-ferguson", thundercat
Previous: Marie Dahlstrom Returns With ‘anymore.’ & ‘Where the Flowers Grow’ From Upcoming EP ‘Nine’ Next: The Baylor Project Encourage You To ‘Laugh And Move On’