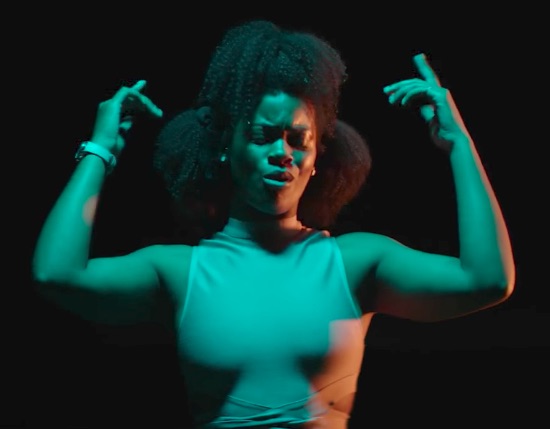 Dreamville’s first lady Ari Lennox continues to stoke the fire she ignited last year with the release of her smoking hot EP, PHO. After living out a fantasy in the visual for her track "Night Drive," the D.C.-native is back with another artful offering. For the visual for her single “GOAT,” director Scott Lazer makes Ari the focal point on a dimly lit set as she performs her ode to the champion lover she can’t quite seem to get off her mind.

With the exception of a few gazing cartoon eyes and seemingly randomly-placed dogs, the soulful songstress claims the spotlight as she sings, “See, baby, you're the greatest / Of all time, the greatest / So won't you hit my line / You're still on my mind.” We can't quite figure out the symbolism of the peering peepers and her canine crew since the song is named "GOAT" after all, but we are thoroughly captivated by her signature, sultry tone and rhythmic movements. Ari is still caught up in her lover's rapture from their last rendezvous and makes it very clear that she’s down for another round, declaring, “I ain't seen your ass in a couple months / But if you want it, baby, you can get you some / And all that conflict, we can work out / So gon head put this good in your mouth.” If her bae knows like we know, he'll get back to Ari quick, fast and in a hurry.

Watch Ari Lennox’s “GOAT” visual and add this song to your baelists post haste. Keep up with all of Ari's moves as she tours with J. Cole on his 4 Your Eyez Only World Tour by following her on Twitter, Instagram and Facebook.