There’s Nothing ‘Suspect’ About Dafina 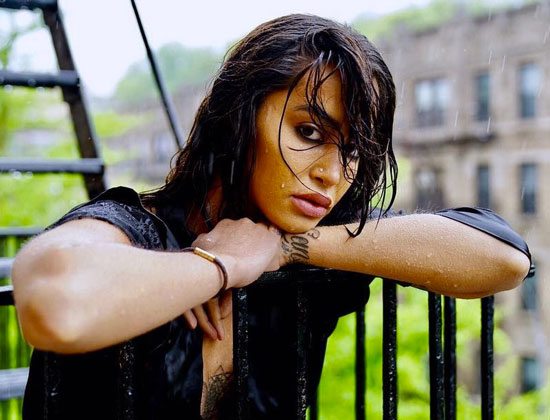 After gaining critical acclaim across Europe and linking up with French Montana for his single “Famous” from his Jungle Rules album, rising star Dafina Zeqiri, who performs simply as Dafina, is on her way to making quite a name for herself here in The States. Born in Sweden and of Albanian heritage, the sultry songstress has released the song "Suspect," another track from her upcoming EP King, led by the single "Told Ya."

“Suspect” is a spicy tune that is all about a girl just wanting to have her fun and enjoy her own space. With crisp and powerful vocals she declares, “This ain’t an open invitation, I came here for myself / So Mr. Bow-tie, would you please sit somewhere else?” She says the spirited and bluesy track, “is about us ladies who just want to go to the bar, go out to the club...and just have a drink for ourselves without having a guy thinking we're out there to make a move.” She explains, “No, I'm out here today just by myself, I want to have a drink by myself, I want to enjoy myself in the pub without being bothered by anyone. But if it was another day, if I was feeling different another day, [then] maybe, but not tonight.” We certainly get it, as we have all found ourselves in a “window seat” kinda mood.

Dafina’s latest release is said to give fans a taste of what’s to come from her EP, which also serves as her debut project in the English language. Throughout her distinguished career overseas, she's only released music in her native languages, Swedish and Albanian. King will cover an array of emotional stories and subject matter, including “relationships, friendships, independence as a woman and clapping back those who underestimated you.” We are definitely intrigued and looking forward to hearing her take on these relatable and timely topics.

Give “Suspect” a listen while enjoying some much needed “me time.” For more music from Dafina, you won't have to wait too long with King's imminent release on Friday, November 10th. Pre-order the EP now on Amazon, iTunes or Google Play, and be sure to follow Dafina on Twitter, Instagram and Facebook.


TAGS:  audio, Dafina, Dafina Zeqiri, French Montana
Previous: Mariah Carey Prepares For An Animated Holiday With ‘All I Want For Christmas Is You’ Movie & Soundtrack Next: NYC Bouncers: Win Tickets To See Lalah Hathaway In Concert!