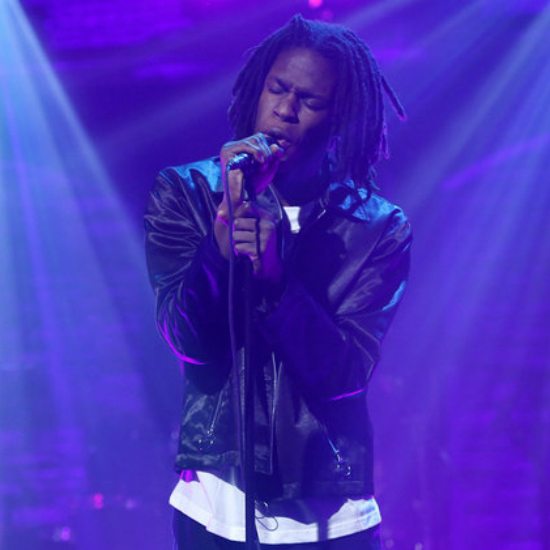 Toronto soul/R&B singer Daniel Caesar is continuing his rise to fame on the heels of his mixtapes and acclaimed debut, Freudian. Last night he paid a visit to Late Night With Seth Meyers to perform the breakout single, “Get You,” a smoldering slow jam perfect for late nights – and some early mornings, too.

For his performance, young Mr. Caesar kept things simple. It was just him, his band and a mic on a dark stage backlit with blue, purple and pink fluorescent lights. Of course, that’s all the Canadian musical export needs, as the focus is on his delivery of his massive hit. Daniel hits every note effortlessly and passionately. We feel him while getting ever-so-slowly in our feels. All in all, he delivers a straightforward live performance with no real surprises from the original. While the performance didn't need any theatrics or pyrotechnics, we look forward to seeing what the emerging artist can do after he gets more experience on the stage and in front of a live studio audience.

“Get You” has become a GTD playlist staple for the 2017 cuffing season. His performance on Late Night With Seth Myers only certifies its status and the star power of Mr. Caesar. If you haven’t peeped Freudian or any of his mixtapes yet, shame on you. You should go listen not now, but right now. Before you do, check out his Late Night performance below.