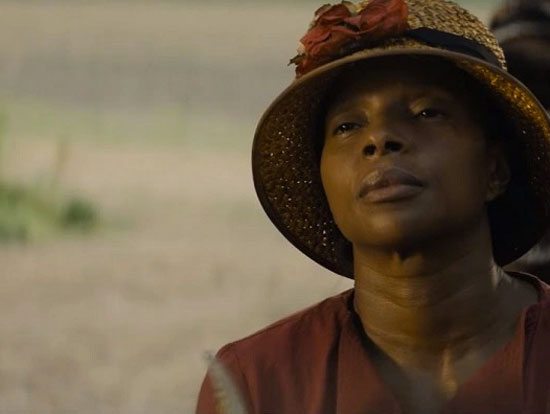 By now, you've probably watched Mary J. Blige starring in the director Dee Rees' latest film Mudbound. If for some reason you haven't, we're silently judging you but will still pass you the popcorn and encourage you to listen to the R&B diva's newest song from the movie's soundtrack. In "Mighty River," Mary channels her character, Florence Johnson, the mother of a soldier returning after World War II who battles a racist Mississippi in 1946. While the circumstances are depressing, the song itself is the opposite.

With her strong vocal chops, Mary inspires and uplifts listeners singing, "White flag in hand / I don't want to fight / No lines in the sand, I'm on your side / Invisible, no color life / It's time we put our, put our, put our differences aside." Co-written by producer extraordinaire Raphael Saadiq, both he and Mary move us to a hopeful place as the song builds to the chorus. The five-minute track will take you all the way to church if you let it, with its soaring harmonies and sound bed.

Along with appearing in Mudbound, Queen Mary will make her big screen animated debut in Paramount Pictures' Sherlock Gnomes in March 2018. Our girl is booked, busy and blessed and still dropping tracks from her most recent album, Strength of a Woman, while looking amazing with her divorce-ready revenge body. Mudbound is currently available for streaming exclusively on Netflix, and you can find the Mudbound (Original Motion Picture Soundtrack), filled with instrumental tracks by the film's composer Tamar-kali and contributions from Odetta and The Ek-Stompers, on Amazon, iTunes, Google Play and Spotify.