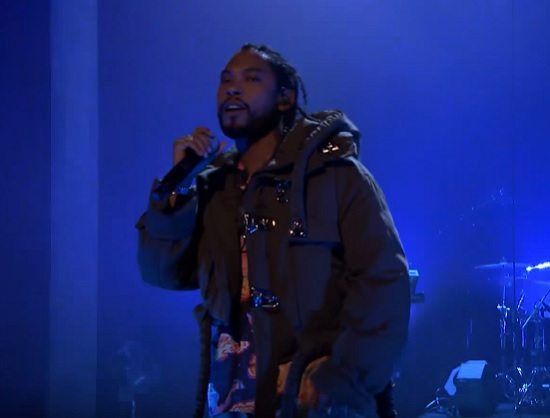 Miguel dropped an early musical Christmas gift in our laps over the weekend with his fourth studio album War & Leisure. We were definitely feeling the laid-back vibes and his balancing of the personal and political on the cut, so it's no surprise that Miguel wanted to do a bit of celebrating. The first stop for celebration? The stage of The Tonight Show Starring Jimmy Fallon of course. The diminutive singer/songwriter took to the nightly talker to give the audience a taste of the set's lead single, "Sky Walker."

For this particular performance, it seems that Miguel looked to the title of the song for inspiration as he dons an airman's uniform with a parachute billowing behind him as he performed the song. This, of course, created an interesting effect, especially since his band could be seen backlit behind the parachute as he did his thing out front. Speaking of which, your boy seemed to be having the time of his life, with a large smile plastered on his face nearly the entire time, especially after he amped up the energy once the parachute finally dropped at performance's end to reveal the band rocking out.

It was a nice performance from Miguel and perhaps a preview of what's to come when he embarks on his upcoming War & Leisure Tour this coming February. Check him out soaring in his element on The Tonight Show below.