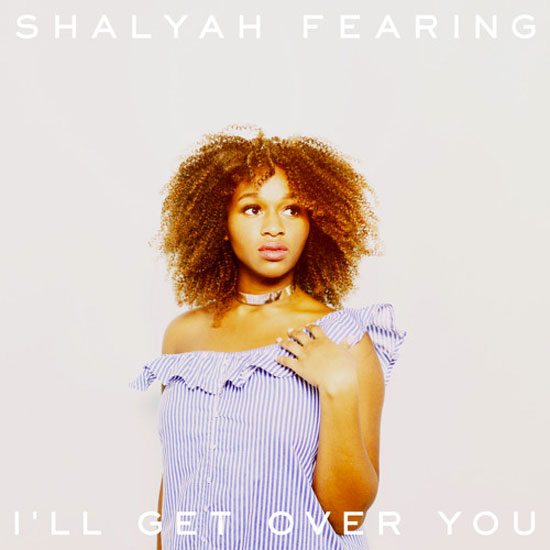 Like most 17-year-olds, Shalyah Fearing is busy with high school, getting her driver's license and coming into her own as a young woman. But unlike most teens her age, she's already appeared on national television on season 10 of The Voice and gained a spot on Adam Levine's team. Those who remember Shalyah from her stint on The Voice will recall the then 15-year-old possessing impressive vocals that sounded far beyond her years as she tackled songs like Beyoncé's "Listen" and Jennifer Holliday's Dreamgirls showstopper "And I Am Telling You I'm Not Going." She made it to the Top 8 before she somehow got the cut. One listen to Shalyah's debut single "I'll Get Over You," however, and you'll truly wonder how she didn't make it to the winner's circle.

"I'll Get Over You" is another showcase for Fearing's vocals, but this time it's her lower register that's in the spotlight. Her range is on full display, and the growth in her artistry is evident as she commands the production by Katalyst, the GRAMMY-nominated production duo made up of Ken Lewis and Brent Kolatalo. Not only does Shalyah Fearing sound out-of-this-world amazing on "I'll Get Over You," but her voice acts as a soothing balm on the bittersweet song about heartbreak.

"Yeah, so you hurt me, told me some lies / But mama she told me, everything's gon' be alright  / Cause you're not the only one I'll ever love / No, you're not the only who'll break my heart," Fearing breaks it down on the pre-chorus, approaching the subject with a maturity and clarity that many grown folks lack. She further shows her resolve on the chorus, singing, "But if there's one thing I know, it's that broken hearts they don't last / And I'll get over you." She does expose her vulnerability later in the song, admitting that although she's moved on with someone else, she does miss her ex and will love him forever.

“To me, this song embraces the process of breaking up, hurting, and moving on, but still being pulled by their influence,” Shalyah shared with us about the track. “I want my listeners to feel that pain and agony, but also know that in time the hurt will subside. We’ll always have bitter and sweet experiences in life, fond memories mixed with lessons well learned.” Shalyah Fearing may be only 17, but she's quite wise.

Do yourself a favor and listen to the SoulBounce exclusive world premiere Shalyah Fearing's "I'll Get Over You," then follow her across the web on Facebook, Instagram, Twitter and her own website. This young lady is going places, with her voice leading the way.