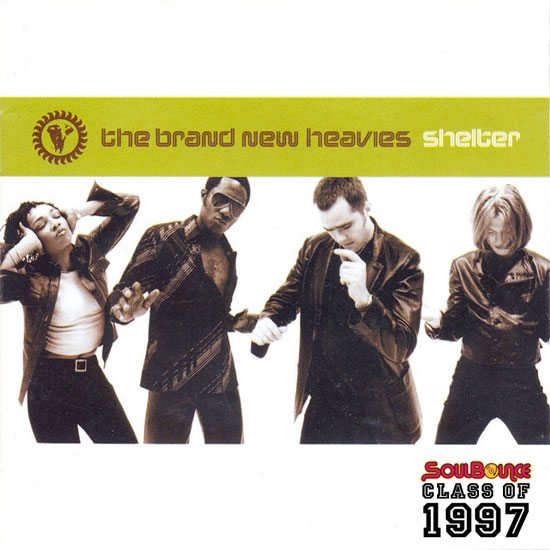 Transition was the name of the game for The Brand New Heavies in 1997. They were coming off the success of their 1994 effort Brother Sister, which had spawned five singles in the U.S. and the U.K. They were also down a crucial member, as vocalist N'Dea Davenport left the group's ranks to eventually work on her own solo material. However, the show always must go on and the group's remaining (and founding) members — Simon Bartholomew, Andrew Levy and Jan Kincaid — joined with singer/songwriter Siedah Garrett for their album Shelter. Though they had a change in personnel, their sound still remained true to its jazzy, funky roots

For American audiences, Shelter is probably best known for their single "Sometimes." The song, released in March of 1997, was the lead single for the effort and possessed a silky, soulful sound that perfectly framed Siedah Garrett's voice. However, what truly bolstered the single to its peak position of No. 21 on Billboard's Hot Adult R&B Airplay chart was its Ummah remix, which featured production by J Dilla and a rap from Q-Tip and brought back some of the hip-hop influence the group had courted on their second release, Heavy Rhyme Experience, Vol 1. Internationally, their spiced up version of Carole King's often covered classic "You've Got A Friend" (which wasn't originally on the album's U.S. version but was added in later pressings) landed the group a minor hit on the charts, reaching No. 9 on the U.K. Singles Chart that October. Outside of those two singles, the rest of the album contained some memorable jams. "I Like It," which also appeared on the Love Jones soundtrack, harkened back to the funky jam sessions of the the '60s and '70s. Then there was title track "Shelter," which was a bit of a sonic cousin to Jade's "Don't Walk Away" and featured a rare lead vocal from Jan. Also not to be left out was the album's third single "You Are The Universe," a minor U.K. hit that found the group playing in pop territory with its almost anthemic, upbeat vibe. The sound of the album, overall, was a bit more conventional for the Heavies, mainly because the sound of R&B had begun to adhere to the group's mold, making Shelter feel right at home in the crowd.

Shelter signaled a lot of things for BNH. It would be Siedah's first and only album with the group, as she would leave in 1998 to focus on her career as a songwriter. This, of course, would lead to the group's revolving door of featured vocalists, though the fellas would eventually reunite with N'Dea Davenport in 2013 for their release Forward. Since then, the group has functioned in a few iterations, with Jan Kincaid eventually leaving the band in 2015 and forming the group MF Robots with one-time Heavies singer Dawn Joseph. The remaining core group still tours together with vocalist Sulene Fleming, though there hasn't been an official Heavies release since 2014's Sweet Freaks. But who knows what could happen next for the group? The world seems to always be ready for another listen from the talented groundbreakers.