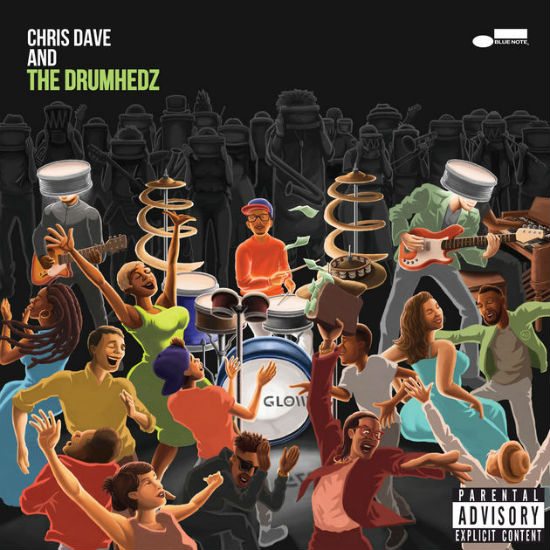 After keeping fans chomping at the bit with three spectacular and star-studded singles, Chris Dave and the Drumhedz have finally released their self-titled debut album. Thankfully, the trio of teasers was just the tip of the genius contained in the project, as it serves something for every mood. From the moment the listener presses play, they are transformed and taken on a cosmic journey fit for celebrating, resisting and even lovemaking.

The voyage through the astute and unpredictable mind of the band’s leader and master drummer Chris Dave is full of twists and turns, each more intriguing than the next. The takeoff is chock full of head nods and funk faces with back-to-back bangers “Universal Language” featuring KRNDN, Sy Smith and D.Rose, "Dat Feelin" with SiR, Tiffany Gouche and Keyon Harrold and "Black Hole" featuring Anderson .Paak. The listener reaches a comfortable and intoxicating plateau with the breathtaking ballad “Spread Her Wings” blessed by Bilal and Tweet before being hypnotized with “Sensitive Granite” featuring Kendra Foster. The sensual follow-up of “Cosmic Intercourse” with Stokley Williams and Casey Benjamin is anything but fair, and the horns of the spoken-word track “Atlanta, Texas” with Goapele and Shafiq Husayn completely finish the listener off. There’s a gentle jolt back to life with “Destiny N Stereo” before turning all the way up with the sonically angry Anderson .Paak and SiR-assisted track entitled “Clear View.” The descent begins with surprisingly more mellow grooves, including “Job Well Done” with Anna Wise and SiR, “Lady Jane” and “Trippy Tipsy,” where the drum and horn sections take center stage.

Overall, the varied yet cohesive album is a seamless blend of generous helpings of jazz, funk, R&B and hip-hop. With the assistance of nearly 50 gifted musicians, Chris Dave was somehow able to maintain the instrumental pulse of the project despite the wide range and large number of vocal features. "If you play drums, that's what people look at you as – just the drummer," Dave says. “The project was to show that drummers can write, produce and arrange." Mission accomplished.

Put everything down and give the debut album from Chris Dave and the Drumhedz a serious, uninterrupted listen. Sit with it a moment and then give it another spin. With such an outstanding and dynamic project, you’re sure to hear something new each time you listen.