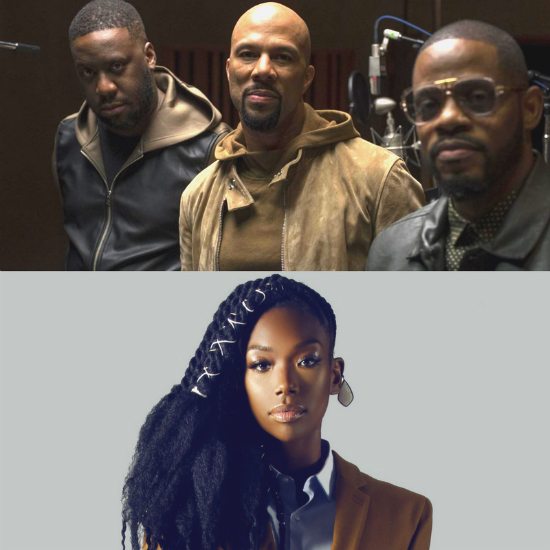 When artists who we already love individually decide to pool their talents collectively and create a supergroup, it's usually a cause for celebration. Today there's a lot to celebrate with the announcement that rapper Common, pianist/producer Robert Glasper and drummer/producer Karriem Riggins have come together to form a new group named August Greene. The trio will debut their self-titled album in March, but before then, they are introducing themselves with the lead single "Optimistic" featuring the soothing vocals of R&B star Brandy. The uptempo track is a refix of Sounds of Blackness' 1991 hit "Optimistic."

In the trio's version, Brandy takes on the role of soloist and choir, effortlessly singing over Robert's skilled piano playing and Karriem's effervescent drums. Common comes through to uplift with his verse in the middle of the track, waxing poetic about Black excellence and staying focused. Brandy ends the track with her signature runs, which will make you have your own personal praise party as the live instrumentals wash over you during the five-minute offering.

We're not sure where Robert Glasper finds the time or energy, since just last month he announced the formation of his other new band R+R=NOW. Whatever the case, we welcome all the new music and partnerships our playlists can take. Common, Robert and Karriem aka August Greene will make their live debut at New York City’s Highline Ballroom on January 26th for Glasper's sixth annual GRAMMY Joint, and we'll be able to add August Greene to our music collections on March 9th vis Amazon Music and stream on both Amazon Music Unlimited and Prime Music. Listen to August Greene and Brandy's latest track "Optimistic" right here if you need something soulful and uplifting to brighten your day.