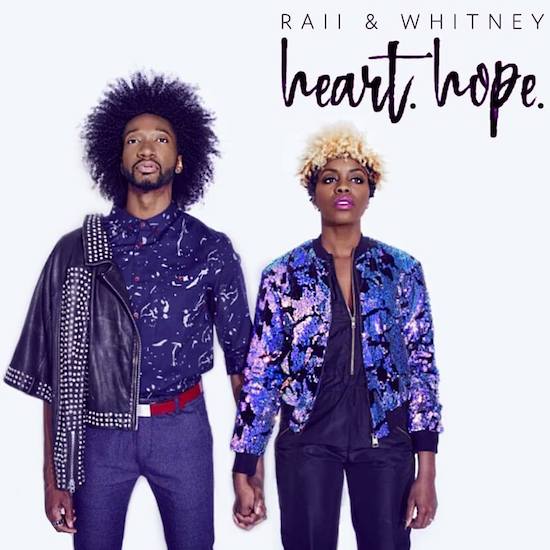 To paraphrase a famous Hal David/Burt Bacharach lyric, "What the world needs now is love, Black love." Apparently, we're not the only ones that feel this way. Codie and Tommy Oliver's docu-series Black Love broke network records when it debuted on OWN last year. We love to see Black couples thriving personally and professionally, but it's deeper than entertainment, it's the kind of upliftment that gives hope and strengthens our community. So you can understand why our appreciation runs deep for singers RAII & Whitney and their long-awaited debut EP Heart.Hope.

Over the years, the talented couple – performing together for ten years and married for seven – has amassed a devoted following as they travel the world singing background vocals for the likes of Alicia Keys, Ed Sheeran, Estelle and Emeli Sandé. Somewhere in between, they managed to wow the judges on Season 11 of America’s Got Talent, launch their own agency/label (His & Her Entertainment) and create the vlog series Marriage & Music all while writing and recording original music for several projects. This duo stays busy and they spend a lot of time together. So it speaks volumes that their debut is a dedicated celebration of relationships. That's a special kind of love right there, and it shows through their musical chemistry.

Raii Smith and Whitney Keaton Smith each possess an impressive range, but when they duet, it elevates their vocals to another level. The album is mainly comprised of covers by classic artists like Marvin Gaye and Tammi Terrell ("You're All I Need To Get By"), Donny Hathaway and Roberta Flack ("Where Is The Love"), Sade ("Love Is Stronger Than Pride") and Cyndi Lauper ("Time After Time"). While we've heard their refreshingly unique renditions of these songs at various times in the past, it's wholly satisfying to hear them packaged together as a set.  They also deliver two different flavors of an infectious original tune: "No Worries Move Yourself" provides acoustic encouragement, while its counterpart "No Worries Step Clap" is a spirited dance groove that we can't get enough of.  The heartfelt spoken word that precedes the music gives an added measure of authenticity to the project's amorous theme.

Stream Heart.Hope. right here then watch the video for "No Worries Step Clap" to groove along with this dynamic duo. Afterwards, support RAII & Whitney by purchasing the EP and stay up-to-date by clicking the links below.