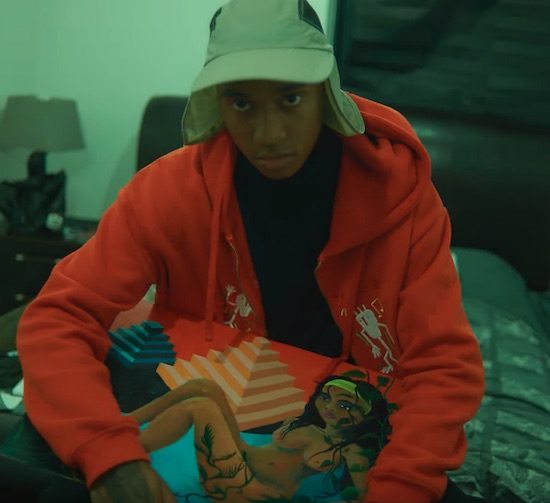 As he prepares to release the follow-up to his 2017 mixtape The Moon & You, Irish rapper Rejjie Snow gives eager fans a taste of what they can expect from his upcoming debut album. He's teamed up with super-producer Kaytranada, rapper Aminé and Los Angeles singer/songwriter Dana Williams for the melancholy but groovy track “Egyptian Luvr.” The tune has just enough bop to put an arch in your back, but the lyrics evoke more of a longing to live in the moment while struggling to let go of the past.

The trippy visual accompanying the track features the Dublin-born artist sitting at the edge of a bed clutching a piece of artwork, likely depicting the subject of his ode. His expression looks as if he’s emotionally drained, which fits his description of the inspiration behind the song perfectly. He says, “The song is about your last moments. Tomorrow isn’t promised and we learn this the hard way. In this song, I was in my last moments [of a relationship], telling my girl how much I love her, and thank you for this journey we rode. My album has lots of different feelings: I wanted it to feel like you’re slowing dying and losing your mind throughout.” In addition to taking listeners on an otherworldly voyage to the moody depths of the 23 year-old’s soul, the much-anticipated project entitled Dear Annie has been described as a “genre-spanning magnum opus” and in addition to Kaytranada features production from Cam O'bi (Chance the Rapper, SZA), Rahki (Kendrick Lamar, Ab-Soul) and French electronic producer Lewis Ofman.

Seize the moment and check out the visual for Rejjie Snow’s “Egyptian Luvr.” Dear Annie drops on February 16th via Honeymoon/300 Entertainment, but you can listen to the four-track teaser EP Dear Annie: Vol. 1 and view the album's full tracklist below.