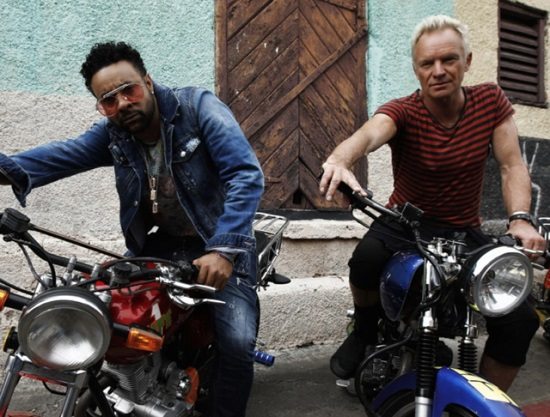 There are a number of artists on our best of both worlds lists. However, we don’t think if we would have put a bunch of names in a fishbowl and we could have ever plucked the random combination of Sting and Shaggy. “Soul Cages” Sting. “Roxanne” Sting. And then there is Mr. Luva Luva, “Mr. Boombastic,” Mr. “It Wasn’t Me” Shaggy. However, when you think about it, Sting’s music has often been influenced by Caribbean flavor, something Shaggy has in spades. Thankfully, their first single, “Don’t Make Me Wait,” is a pleasant surprise.

“Don’t Make Me Wait” is a ballad about being impatient about love. Over a guitar-heavy track with a deep bass line, the boys implore the women in their lives to recognize sunshine. “Nothing wrong with waiting a little bit / You know this more to me than hitting it / But you only get a love like this once in a lifetime,” Shaggy raps in the first verse. Meanwhile, Sting takes the second verse, giving us a slight affectation of a Jamaican lilt while letting his lithe vocals dance across the chorus. Overall, the track is a nice midtempo groove good for winding or liming.

“Don’t Make Me Wait” is the first single from Shaggy and Sting's upcoming joint album, 44/876, due for release April 20. The two headliners only planned to make “Don’t Make Me Wait.” But, after vibing together, they realize they had a mutual love of Jamaican music and culture. The project will also feature collaborations with Robbie Shakespeare of Sly & Robbie, Aidonia, DJ Agent Sasco and Dominic Miller. Hopefully, this track is more than just a fluke and the boys have some more heat coming just in time for summer.


TAGS:  audio, shaggy, sting
Previous: St. Beauty Has A Glow We Need To ‘Discuss’ Next: Full Crate & The Partysquad Team Up With Nick & Navi For A Smoking ‘HOT’ Collabo