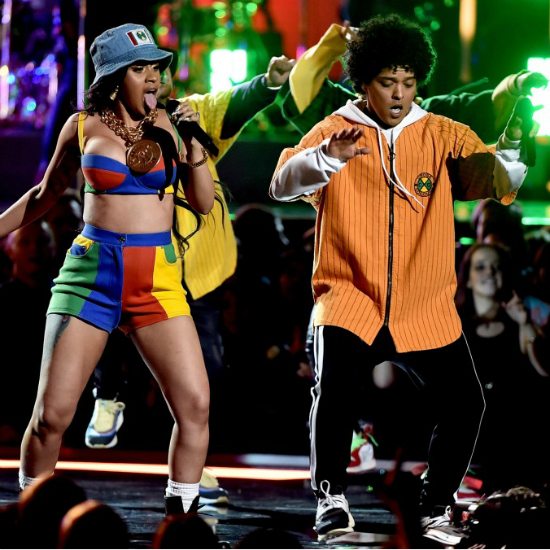 The GRAMMY party may be over but Bruno Mars, the night's big winner, is ready to close the curtain on his 24K Magic album and its equally-successful world tour. Just a few months after wrapping up the nearly year-long international tour, Mars has announced a spate of extended dates and he's tapping his "Finesse" remix co-star Cardi B to join him for what he's calling the tour's "finale."

The expanded dates consist of 12 stops across North America that include Boston, Brooklyn, Los Angeles, Detroit, Toronto and even Tulsa, Oklahoma. Mars first began teasing about the additional tour stops earlier this month on Twitter, telling fans, "What if I told you I wanna do one more U.S tour so we could celebrate 24k Magic together one last time....." Luckily for his followers, they didn't have to wait too long before he made the big announcement the following day. Taking advantage of the great branding opportunity presented in the "Finesse" throwback-themed video, '90s-era clothing label Cross Colours signed on as the sponsors for what Mars promises is the final leg of the 24K Magic World Tour.

Tickets for the latest batch of dates are set to go on sale Friday, February 16th. In the meantime, Mars is also making news this week for offering to help the NFL curate next year's halftime show when the big game lands in Atlanta. Making note of the city's rich musical legacy, Mars makes the case that the prime performance slot could be used to honor the city's legendary hip-hop artists such as "Outkast, T.I., Gucci, Lil Jon, Jeezy, Jermaine Dupri just to name a few," calling it the best party that television has ever seen. While it is yet to be determined if the NFL will take him up on that offer, we can safely say that it would leaps and bounds more entertaining than this year's performance. 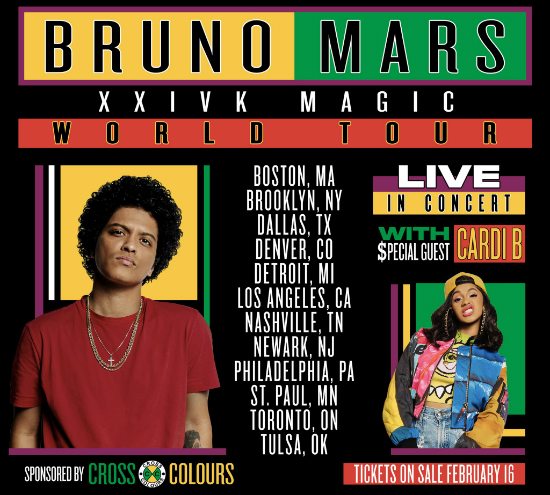 TAGS:  bruno mars", cardi b
Previous: SoulBounce Exclusive: Monophonics Will Have You ‘Beggin’ For More Next: Snoop Dogg & B. Slade Take Us To Church In ‘Words Are Few’