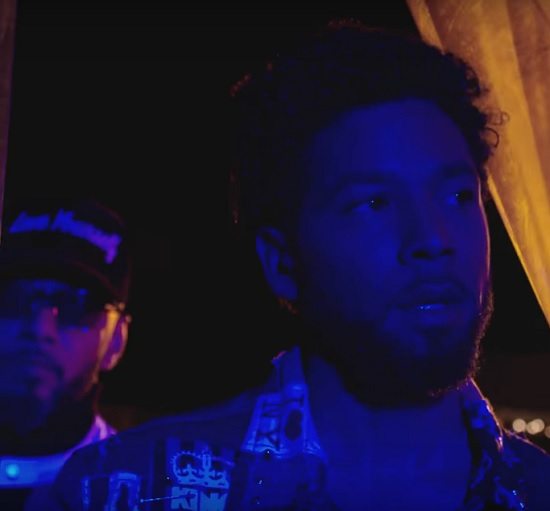 We're on the brink of the release of Jussie Smollett's debut album, Sum Of My Mind. The Empire star has given us a taste of his musical talents on the show before. This time, however, he won't be giving us his art in the form of his character Jamal. Instead, we'll be getting pure, unfiltered Jussie. We got our first experience of this with the release of his debut single and video "Freedom." Now he returns (and he's bringing producer/rapper Swizz Beatz in tow) with his second single "Catch Your Eye" and its video.

Where "Freedom" gave us pop/R&B power ballad, "Catch Your Eye" seems aimed at squarely at urban radio. It seems to check off all the boxes for a modern-day R&B jam. Hip-hop and R&B hybrid sound? Check. High-profile guest starting things off? Check. A song about trying to holla? Double check. However, he elevates things a little by weaving in a bit of a narrative rather than just have a song full of come-ons. He also includes newcomer Melodie Ray, whose pipes bless the chorus and even contribute a few ad-libs here and there. Ultimately, though, it still comes off a bit lackluster. Jussie attempts to fix that in the song's video. In a continuation of "Freedom," which Jussie also directed, we follow one of the couples after that video's final party scene. What happens next is up to interpretation, as we're shown Jussie and Swizz entering a club lit by blacklights like a scene out of Belly as a little bit of everything is thrown at us visually. It turns out that this was intentional, as Jussie was cribbing from Hype Williams.

"I was inspired by Hype Williams film, BELLY and really just Hype in general," he told The FADER. "To me he helped set the tone for what we see visually in everything nowadays. Period. But I also wouldn’t be me if there wasn’t some stream of consciousness. The theme of this video, as is the theme of my album and every visual I do, is the deep, unapologetic love I have for my people."

He also intimated that what we can "watch this visual a million ways and see something different each time," so your guess is as good as ours. What we do know is that Sum Of My Music is set to arrive on March 2nd. Prepare yourself by checking out what Jussie and Swizz have concocted in the song and video below.