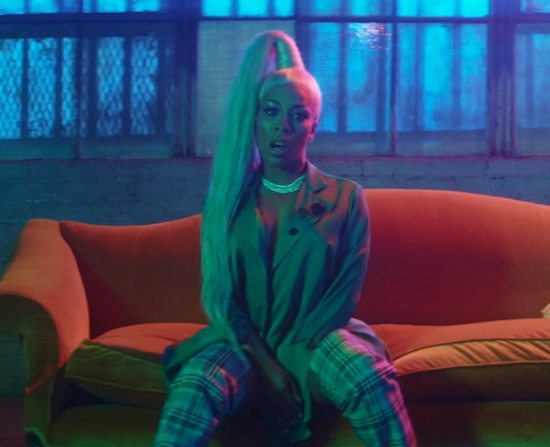 While the common adage is that revenge is a dish best served cold, K. Michelle makes a good case for putting some heat on a n***a’s neck with her latest single, “Crazy Like You.” Over a smooth ‘90s R&B groove, our girl K. puts on her super petty cape to talk big ish to a former flame. She reads for filth on lyrics like, "I would spend your money up / But you don't even make enough." She even gives us a tough 16 bars on the bridge, rapping, “Broke ass n***a, joke ass n***a / Five dollars on a smoke ass n***a / Stay at home with your folks ass n***a / Mama pay your car note ass n***a / Little dick, weak stroke ass n***a,” giving her ex a good old Southern cussing, calling him everything but a child of God and putting his business in the street Quincy Jones style.

As you probably guessed, the video is a revenge story. The clip starts with the Scott Adams quote, “Nothing inspires forgiveness quite like revenge.” It then segues into multiple images of Michelle dressed in a blonde wig and a dominatrix outfit in an abandoned loft setting with fluorescent lighting. As the lights change from blue to pink, we see a myriad of other women waiting to help to assist Ms. Pate with her dastardly plans. In another scene, we spot her whipping around a long blonde ponytail while sitting on a couch next to a creepy doll. Toward the end of the clip, we watch Kimberly in the backseat of her ex-BF's car waiting to exact her revenge, which neither he nor we saw coming.

“Crazy Like You” is the latest single from K. Michelle’s album, The People I Used To Know, and the music video for the track follows visuals for "Birthday," “F*** Your Man” and "No Not You."  Peep the "Crazy Like You" video right here, and join us in staying on K. Michelle's good side.