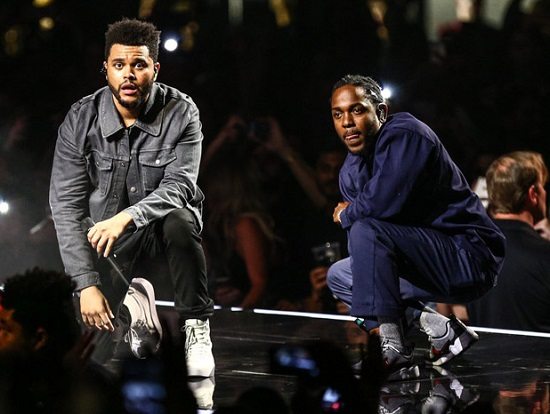 It's officially February, which means it's once again Black History Month. While it remains to be seen if it can top the blackest Black History Month on record, it's in close contention with the upcoming release of Black Panther and its Kendrick Lamar and TDE-produced soundtrack, Black Panther: The Album. Anticipation for both are pretty high and stoking those flames is the drop of yet another song from the soundtrack, The Weekend and Kendrick joint "Pray For Me."

"Pray For Me" is an interesting collabo as it sees Kendrick stepping into The Weeknd's territory soundwise. A futuristic, electronic backdrop reminiscent of the latter's chart-topping Starboy tracks fills the speakers, with an ominous, bass-heavy rumble fleshed out by theatric synths and a chugging rhythm. It's not unexpected when we hear Weeknd's falsetto first as he paints a tale of sacrifice and loneliness as he asks, "Who gon' pray for me? / Take my pain for me? / Save my soul for me / 'Cause I'm alone you see." However hearing King Kendrick on the electronic groove is unexpected, though Kung Fu Kenny rides the beat quite nicely. He takes the opportunity to rap about being a hero, emphasizing themes of sacrifice and selflessness that fit right in with the themes of Black Panther quite nicely. We can totally hear this soundtracking a climactic scene in the movie (and we're so anxious to hear and see when it happens).

After getting a peek at the Black Panther: The Album tracklist and hearing this, we're on pins and needles until the album's release next Friday (February 9th) and the arrival of the film the following week. Get into Kendrick Lamar and The Weeknd's "Pray For Me" collabo below and let us know if it piques your interest for both projects.


TAGS:  audio, kendrick lamar, The Weeknd
Previous: Baltimore Bouncers: Win Tickets To See K. Michelle In Concert! Next: Busta Rhymes, Missy Elliott & Kelly Rowland Team Up To Show You How To ‘Get It’